“Wind Turbine Syndrome” is of course a symptom of a larger malaise—humanity’s largely dysfunctional relationship with planet Earth. Wearing a mantle of righteousness, wind energy has acquired the messianic urgency of a religion whose goal is to forestall  the Armageddon called Global Warming.

It makes for a powerful and bracing morality tale. Except for one problem. Wind energy and its massively proliferating, spinning cruciform turbines may well be, alas, overblown—like every other messiah who’s come down the pike since the dawn of civilization.

If you’re interested in the larger debate over mankind’s broken relationship with planet Earth—a debate featuring wind energy as a key player—you will be interested in a provocative new book by prize-winning historian, Calvin Luther Martin. (Yes, Nina Pierpont’s husband.)

While Nina burns the midnight oil figuring out the whys and wherefores of Wind Turbine Syndrome, Calvin ransacks history, trying to figure out how humanity got into such a mess that turbines—as evangelicals are wont to say of Jesus—are “the answer.” Retired Rutgers University professor, winner of the American Historical Association’s “best book of the year” (Beveridge) award, former Guggenheim and NEH Senior Fellow, and prolific author—Martin has just published “The Great Forgetting.”

“Nothing less than splendid, truly—visually as well as in content. It is a poem and it is magical”— Jack Goellner, Director Emeritus, The Johns Hopkins University Press.

The Great Forgetting? Think of it as “Adam’s Wall,” says Martin. Beast on one side, mankind on the other. So long as that barrier is in place, man and animal no longer share—mind-bendingly share—a common consciousness. As Martin sees it, we have forgotten the First World we once knew on the other side of the wall. A wall separating us not just from animals, but, more ominously, from the larger commonwealth Thoreau called “wildness.” “Where the wild things are,” in Maurice Sendak’s magical phrase. (Beware, however, for on the other side of that wall mankind no longer exercises dominion, as Adam believed himself ordained the Lord of Creation.)

Wherever those wild things are—we, collectively, clearly are not there. This slender, richly illustrated book explores the courageous efforts of a handful of intellectuals—Jesus of Nazareth among them—to breach that wall. To find—to remember—the Door in the Wall. To remove the artificial, incalculably destructive barrier separating modern man from the neurally-extravagant Mind at Large (the phrase is Aldous Huxley’s) that archaeology and ethnology confirm our forebears knew intimately and intuitively since Lucy the Australopithecine walked the earth.

“A stunning and beautiful creation.
A wise guide that threads us back to a place we have forgotten”— William P. Sisler, Director, Harvard University Press. 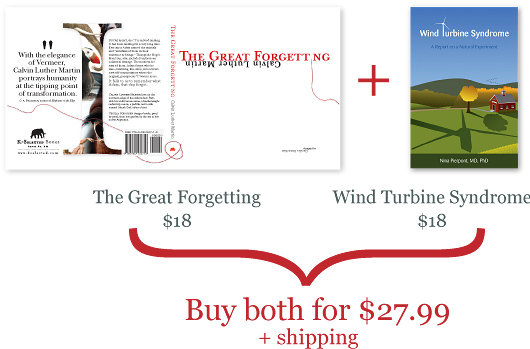 If you want to learn more about “The Great Forgetting”, please visit the book website.


Comments Off on “The Great Forgetting”: Companion to Pierpont’s “Wind Turbine Syndrome”