What part of “It’s our money!” don’t the politicians get?

Editor’s note:  Mary Kay Barton is a resident of Silver Lake, NY.  She has been heavily involved in wind energy issues for years, and is a frequent commentator on the subject.  The following is reprinted with appreciation.
· 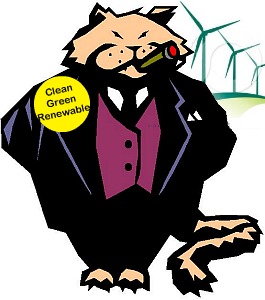 After reading Invenergy’s self-serving pontifications in their recent article, “Invenergy and NYSERDA enter renewable energy credit purchase agreement,” it seems we need to step back and take a look at the bigger picture here:

Real science is not a collection of theorems, but is a process — the core process being the scientific method. The scientific method consists of a hypothesis (e.g., that wind energy is equivalent to our conventional power sources) being subjected to a: (1) comprehensive, (2) objective, (3) independent, (4) transparent, and (5) empirical-based assessment.

The fact is: This has not been done for wind energy — anyplace!

Said in an another easy-to-understand way:

Since we are in agreement that we have energy and environmental issues, let’s say that some entrepreneurs step forward and present us with a black box they claim holds a partial solution to these issues. Due to “confidentiality” reasons, they can’t tell us what’s in the box, but they assure us that it will work. Would we just say, “Great — who do we make the $100 billion check out to?”

We would say something like, “Thanks — that sounds good, but first we need to see the proof that your product will be an effective cost-benefit solution before we mandate your product on citizens.”

Again, this is exactly what has not been done for wind energy. All the Invenergy and NYSERDA propaganda puff-pieces in the world will not change this simple fact. As we’ve been asking for years now, show us the proof!

The fact is: Because industrial wind is not reliable, predictable, or dispatchable — it provides virtually no capacity value (specified amounts of power on demand) and, therefore, needs constant “shadow capacity” from our conventional power sources. Thus, wind has not and cannot replace our conventional power generators (i.e., coal plants), and has not been proven to significantly reduce CO2 emissions anywhere.

The “economics” of wind are just as grim (Click here.). Let’s take a look at just a few of the government programs that enable the boondoggle of wind to exist:

Of the $2.2 billion of stimulus money that went to renewables (mostly wind), 80 percent of that went overseas (see “Renewable energy money still going abroad, despite criticism from Congress“).

Another is the direct cash grant program from the U.S. Treasury, worth 30 percent of the value of these industrial wind projects, which had been due to expire Dec. 31, 2010. However, thanks to politics in Washington, this very generous federal grant program (our money) was extended for another year when it was inserted at the last minute into in the recent federal tax compromise bill.

The project manager of the Lackawanna Steel Winds Project told us three years ago that each turbine cost approximately $5 million. (Could be much more by now, as in December 2010 the U.S. Energy Information Administration determined that the cost of new wind projects increased by 21 percent last year.) Forty-five turbines make Invenergy’s proposed Stony Creek project in Orangeville worth $225 million — with a 30 percent direct cash grant totaling $67,500,000 of our taxpayer dollars. We wouldn’t even be talking about the Stony Creek project anymore if this “free taxpayer money handout program” had not been extended.

Adding insult to injury, as cited in Invenergy’s press release, now NYSERDA is paying Invenergy for the “RECs” (Renewable Energy Credits) using ratepayer dollars that NYSERDA collects from us every month in our electric bills via the “Systems Benefit Charge” (SBC).

And wait — there’s more! On Jan. 25, 2011, NYSERDA announced another $250 million of ratepayer dollars that’s collected in your electric bill each month for the Renewable Portfolio Standard (RPS) will be going to renewable developers (i.e., wind) — transferring ever more of our money from U.S./NYS citizens’ pockets to the international developers’ pockets (click here).

What part of “It’s our money!” don’t our political leaders get? Industrial wind salesmen offer to give communities back a mere pittance of their own money in return for permission to destroy the very environment they claim they wish to save.

Those who are content to participate in this energy scam, drawing in dollars by bellying-up to the corporate welfare bar, are — unwittingly or not — hurting us all.