Editor’s note:  This article is public domain.  You are welcome to circulate & post as you wish.

New England power companies are rapidly moving forward with an ambitious plan to import large amounts of Québec (Canada) hydro-power.  A plan that will require building costly and environmentally disturbing new trunklines to carry “clean electrons” from the James Bay watershed to American homes and businesses.

I’m told New England governors and their energy pals are already popping the corks on the champagne.

I suggest this is premature. I am from Québec. Grew up there. I live 10 minutes from the Québec border. When I was a Rutgers professor, one of my specialties was Canadian Indians (the subject of my first book). When I was a professor, I had a year-long Canadian Embassy fellowship to study the history of Québec at Queen’s University (Kingston, Ontario), so I could teach the history of French Canada.

All by way of background.

Do these governors and their staffs and the energy lobby know how controversial the whole James Bay Project is in Québec? Indeed, throughout Canada? And most especially among the James Bay Cree and Canada’s First Nations in general?  (Think, “solidarity.”)

I think the answer is a thunderous “no!”  (I write this after reading a slick policy analysis of the proposal.)

Typical of all grandiose schemes, there are several “epistemic” (knowledge) holes.  Perhaps the biggest being the blind spot called “north of the border.”

The James Bay Project was the crown jewel of the Separatist crowd in the early ‘70s. And they kept building those dams. And as they did, the Cree and other First Nations kept getting madder and madder.

Canada’s First Nations (they don’t call them “Indians” up there; they’re First Nations) are really pissed off about the whole James Bay thing.

Back, oh, 20 or so years ago, when Hydro-Québec (HQ) tried to finagle a power deal with New England states and NYS and NJ, the Cree mobilized. Ever hear of Chief Matthew Coon Come?  The Cree were on USA TV, they staged a theatrical, symbolic canoe trip down the Hudson.  They came to NYC, they came to NJ, and they talked before crowds—throngs—and the media.

They spoke with quiet passion about the tyrannical Québec government stealing their land and their way of life and their spirit (which is the land). They fanned French/English tensions (which are ancient and never heal).

And all the New England, NY, and NJ governors backed off the plan—even though it looked like a done deal.

The current crop of Northeastern governors and energy guys had better learn a little history, ‘cause it might go on the warpath again. (Remember George Santayana’s “Those who forget the past are condemned to repeat it.”)

The take home message being, don’t be so glib about this coming to pass—from the Québec side of things. Or so glib about it remaining a “reliable source of power.”  Or about “energy security.” Canada is a foreign country, after all, and Québec (“Le petit nation,” as they’ve called themselves for generations) is a foreign country within the foreign country of Canada. Quebecois are very nationalistic.  (Read their license plate.  Get a French-English dictionary and translate.) 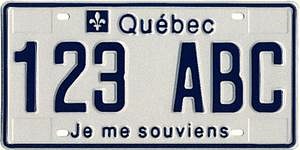 One more time, to really flog it.  This is a highly charged issue in Québec and, especially, among Canada’s (very powerful and, at the drop of a match, militant) First Nations.

Side note: If the Cree gain the sympathy of the Iroquois—literally, my neighbors—who straddle NYS, Quebec, and Ontario, the conflagration begins. The Six Nations Iroquois are already mad as hell about several issues which I won’t bore you with, mostly having to do with cigarettes—which they manufacture—and over Gestapo tactics by Canadian Customs and Border authorities (which my wife and I have personally experienced, by the way). Did you know the Iroquois next door to me took over a Canadian government border crossing a year ago, and it remains closed—by the Iroquois? (My wife, by the way, was the pediatrician for the St. Regis Mohawk Nation for some years, and she continues to have numerous Mohawk patients.)

Okay. There’s more to “Hey, let’s import Québec hydro-power!” than meets the politician’s eye. HQ does not command and control the First Nations.

Nor does it control the Québecois, who are a canny crowd with that infernal Gallic tendency to riot. (Americans are not used to this, despite our blather about 1776.)

This is electric power taken from First Nations’ souls, and they’re mad as a beaver on steroids. (By the way, my sense is that HQ is regarded by many Quebécois as a law unto itself.)

Now for an uncomfortable question.  (You should have known this was coming.) If Québec (let’s say, Hydro-Québec) has all this power to sell, real cheap—um, why isn’t it selling it to Ontario, which has soaring electricity rates (going higher as I speak) and which has bought wholesale into the wind energy economic fiasco?

To be blunt, Ontario is spilling its guts subsidizing over-the-top wind energy projects right, left, and center. Rural Ontario is in revolt. The Ontario Liberals may well lose the next election over this. These are high stakes, yes?

So, why didn’t the Ontario Liberals—Premier McGuinty—just work a deal with HQ to buy all that cheap, “clean, green, renewable” hydro?  (It’s a win-win!  Global warming runs out of gas in Ontario, Dr. Suzuki is rapturous—and nobody gets hurt!)

Something doesn’t add up.

For that matter, why isn’t HQ selling all this hydro to New Brunswick, PEI, and Nova Scotia, which likewise bought into  Big Wind—expensive provincial subsidies and very expensive rates for industry and domestic consumers?

I’m not done.  Why is the government of Québec jamming industrial turbines down the throat of numerous Québec communities? I mean, what’s the point of building (largely through government subsidy) gold-plated “wind farms” costing ratepayers ballooning electric bills, when, for Chrissakes, you’ve already got an overabundance of cheap “clean, green, renewable” electrons?

What am I missing?