“Why the wind industry is costing you big bucks” (Fox News) 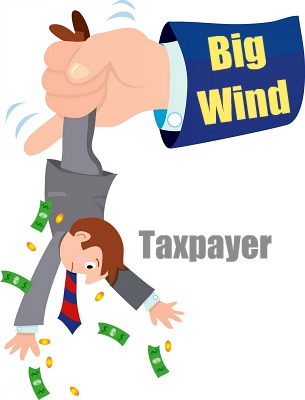 Image did not accompany the original article

.
“Why the Wind Industry Is Full Hot Air and Costing You Big Bucks”

.
The American Wind Energy Association has begun a major lobbying effort in Congress to extend some soon-to-expire renewable-energy tax credits. And to bolster that effort, the lobby group’s CEO, Denise Bode, is calling the wind industry “a tremendous American success story.”

But the wind lobby’s success has largely been the result of its ability to garner subsidies. And those subsidies are coming with a big price tag for American taxpayers. Since 2009, AWEA’s largest and most influential member companies have garnered billions of dollars in direct cash payments and loan guarantees from the US government. And while the lobby group claims to be promoting “clean” energy, AWEA’s biggest member companies are also among the world’s biggest users and/or producers of fossil fuels.

A review of the $9.8 billion in cash grants provided under section 1603 of the American Recovery and Reinvestment Act of 2009 (also known as the federal stimulus bill) for renewable energy projects shows that the wind energy sector has corralled over $7.6 billion of that money. And the biggest winners in the 1603 sweepstakes: the companies represented on AWEA’s board of directors.

An analysis of the 4,256 projects that have won grants from the Treasury Department under section 1603 over the past two years shows that $3.37 billion in grants went to just nine companies — all of them are members of AWEA’s board. To put that $3.37 billion in perspective, consider that in 2010, according to the Energy Information Administration, the total of all “energy specific subsidies and support” provided to the oil and gas sector totaled $2.84 billion. And that $2.84 billion in oil and gas subsidies is being divided among thousands of entities. The Independent Petroleum Association of America estimates the US now has over 14,000 oil and gas companies.

The renewable energy lobby likes to portray itself as an upstart industry, one that is grappling with big business and the entrenched interests of the hydrocarbon sector. But billions of dollars in 1603 grants – all of it  exempt from federal corporate income taxes – is being used to fatten the profits of some of the world’s biggest companies. Indeed, the combined market capitalization of the 11 biggest corporations on AWEA’s board – a group that includes General Electric and Siemens — is about $450 billion.

But the subsidies are running out at the very same time that a cash-strapped Congress is turning a hard eye on the renewable sector. The collapse of federally backed companies like solar-panel-maker Solyndra and biofuel producer Range Fuels, are providing critics of renewable subsidies with plenty of ammunition. And if critics need more bullets, they need only look at AWEA’s board to see how big business is grabbing every available dollar from US taxpayers all in the name of “clean” energy. Indeed, AWEA represents a host of fossil-fuel companies who are eagerly taking advantage of the renewable-energy subsidies.

Consider NRG Energy, which has a seat on AWEA’s board. Last month, the New York Times reported that New Jersey-based NRG and its partners have secured $5.2 billion in federal loan guarantees to build solar-energy projects. NRG’s market capitalization:  $4.3 billion.

But NRG is not a renewable energy company. The company currently has about 26,000 megawatts (MW) of generation capacity. Of that, 450 MW is wind capacity, another 65 MW is solar, and 1,175 MW comes from nuclear. So why is NRG expanding into renewables? The answer is simple: profits. Last month, David Crane, the CEO of NRG, told the Times that “I have never seen anything that I have had to do in my 20 years in the power industry that involved less risk than these projects.”

Or look at E.On, the giant German electricity and natural gas company, which also has a seat on AWEA’s board of directors. In 2010, the company emitted 116 million metric tons of carbon dioxide an amount approximately equal to that of the Czech Republic, a country of 10.5 million people. And last year, the company – which has about 2,000 MW of wind-generation capacity in the US — produced about 14 times as much electricity by burning hydrocarbons as it did from wind.

Despite its role as a major fossil-fuel utility, E.On has been awarded $542.5 million in section 1603 cash so that it can build wind projects. And the company is getting that money even though it is the world’s largest investor-owned utility with a market capitalization of $45 billion.

Another foreign company with a seat on AWEA’s board: Spanish utility Iberdrola, the second-largest domestic wind operator. But in 2010,  Iberdrola produced about 3 times as much electricity from hydrocarbons as it did from wind. Nevertheless, the company has collected $1 billion in section 1603 money. To put that $1 billion in context, consider that in 2010, Iberdrola’s net profit was about 2.8 billion Euros, or around $3.9 billion. Thus, US taxpayers have recently provided cash grants to Iberdrola that amount to about one-fourth of the company’s 2010 profits. And again, none of that grant money is subject to US corporate income taxes. Iberdrola currently sports a market cap of $39 billion.

Another big winner on AWEA’s board of directors: NextEra Energy (formerly Florida Power & Light) which has garnered some $610.6 million in 1603 grants for various wind projects. NextEra’s market capitalization is $23 billion. The subsidies being garnered by NextEra are helping the company drastically cut its taxes. A look at the company’s 2010 annual report shows that it cut its federal tax bill by more than $200 million last year thanks to various federal tax credits. And the company’s latest annual report shows that it has another $1.8 billion of “tax credit carryforwards” that will help it slash its taxes over the coming years.

The biggest fossil-fuel-focused company on AWEA’s board is General Electric, which had revenues last year of $150 billion. Of that sum, about 25 percent came from what the company calls “energy infrastructure.” While some of that revenue comes from GE’s wind business, the majority comes from building generators, jet engines, and other machinery that burn hydrocarbons. The company is also rapidly growing GE Oil & Gas, which had 2010 revenues of $7.2 billion. GE Oil & Gas has more than 20,000 employees and provides a myriad of products and services to the oil and gas industry.

GE has a starring role in one of the most egregious examples of renewable-energy corporate welfare: the Shepherds Flat wind project in Oregon. The majority of the funding for the $1.9 billion, 845-megawatt project is coming from federal taxpayers. Not only is the Energy Department providing GE and its partners – who include Caithness Energy, Google, and Sumitomo — a $1.06 billion loan guarantee, as soon as GE’s 338 turbines start turning at Shepherds Flat, the Treasury Department will send the project developers a cash grant of $490 million.

On December 9, the American Council on Renewable Energy issued a press release urging Congress to quickly extend the 1603 program and the renewable-energy production tax credit, because they will “bolster renewable energy’s success and American competitiveness.”

But time is running short. Backers of the renewable-energy credits say that to assure continuity on various projects, a bill must be passed into law by March 2012. If that doesn’t happen, they are predicting domestic investment in renewable energy could fall by 50 percent. A bill now pending in the House would extend the production tax credit for four additional years, through 2017. The bill has 40 sponsors, 9 are Republicans. The bill is awaiting a hearing by the House Ways and Means Committee.
.

Robert Bryce is a senior fellow at the Manhattan Institute. His latest book is Power Hungry: The Myths of “Green” Energy and the Real Fuels of the Future.