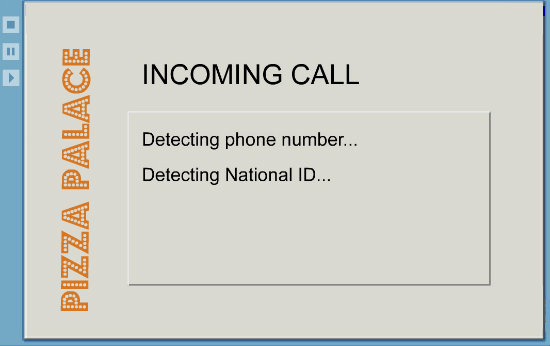 Click anywhere above to listen to the future.  America’s future.  Short video by the American Civil Liberties Union.  It ends with the question, “Do you want to do anything to prevent this?”

We put it on this site because we think there’s a connection between the mentality which forces wind turbines down the throat of communities, and the Big Brother (Orwellian) mentality forecast in the video.

Control.  State control.  In the name of the new god, “security.”  In the case of wind turbines, “securing us from the threat of global warming.”  At least that’s the official propaganda.  General Electric, Vestas, Siemens, Wall Street, and Big Oil all know it’s about “harvesting” tax dollars.

When you open the video, a menu soon appears with the category “Health” (upper righthand corner).  (“Mary,” the cheerful gal taking the man’s order, clicks on “Health” further along in the dialogue.)  I’m married to a medical doctor.  For those of you who don’t know, all medicine in America is now controlled by Big Insurance.  Surprised?  Putting this more starkly, all medicine in America is “driven by” insurance companies.  Now, consider Electronic Medical Records.  EMR.  This is the “new thing” in medicine.  Doctors are under tremendous pressure to switch all their patient records to EMR, which can be (will be) linked to a central database.  The database will, in due course, be controlled by Big Insurance.  My wife tells me that the EMR format for patient records is pretty much a matter of checking off boxes—checking off pre-set definitions and categories of clinical diagnosis.

There are at least three alarming elements to this EMR business:  (1) It is furthering the trend of replacing medical doctors with Physician Assistants and Nurse Practitioners.  PA’s and NP’s are terrific, but as replacements for MD’s—that’s an economic decision being made by Big Insurance and financially-strapped hospitals and clinics.  (2) When your health is assessed by a checklist, by a form, then both you and the profession of medicine have lost something—lost the range of “possibility” upon which good medicine and good science rely.  With EMR, Wind Turbine Syndrome would never have been detected.  Think about it.  (3) The third alarm bell is, of course, that Big Insurance arm-in-arm with Big Government will control medical care, through and through.  And it will be up to Big Insurance/Big Govt. to decide how your medical record is shared, and with whom.  All in the name of “good government,” by the way, and “best practices” and “the bottom line for insurers” (hence the necessity of adding a “health” link to Pizza Palace’s online order form)—and don’t forget, “security.”

Researchers in mythology have devoted far too little attention to the goddess Securitas. Some have maintained she is only a pale personification, but they are profoundly mistaken. What other ancient deity has survived to our own times and enjoys such robust health? This fact alone should be an incentive for deeper studies and for scholarly reflection.

We know that each god ruled over a specific sphere of reality, had his own zealously guarded hunting district and favorite human game. The domain of Securitas is murky, determined by an unclear threat. Her entire inventiveness consists in devising ever-new dangers. She skillfully gives these out in doses, for she knows the art of gradation. Sometimes she is satisfied with a rioting suburb, then she embraces a frenzied city, wanders from one continent to another like the plague, captures land, water, air. Her borders are elastic. Who sets them? Most likely fear.

Securitas belongs to the species of monsters. Compared to her, what are all these childish monster-giants, dragons, half-men and half-animals, hybrids haphazardly sewn together? Securitas is very much like us. She is a monster with a human face.

Like every deity, Securitas draws vital forces from our hopes and fears. She possesses a vast amount of psychological knowledge. She does not lavishly give away eternal youth because this is a charlatan’s stock-in-trade. She does not promise other worlds, nor does she deceive us with notions of justice, because when all is said and done each of us—in the depths of the heart—counts only on a final act of mercy. Securitas puts us face to face with the cruel alternative: either security or freedom.”

With appreciation to John Droz for bringing the video to our attention.