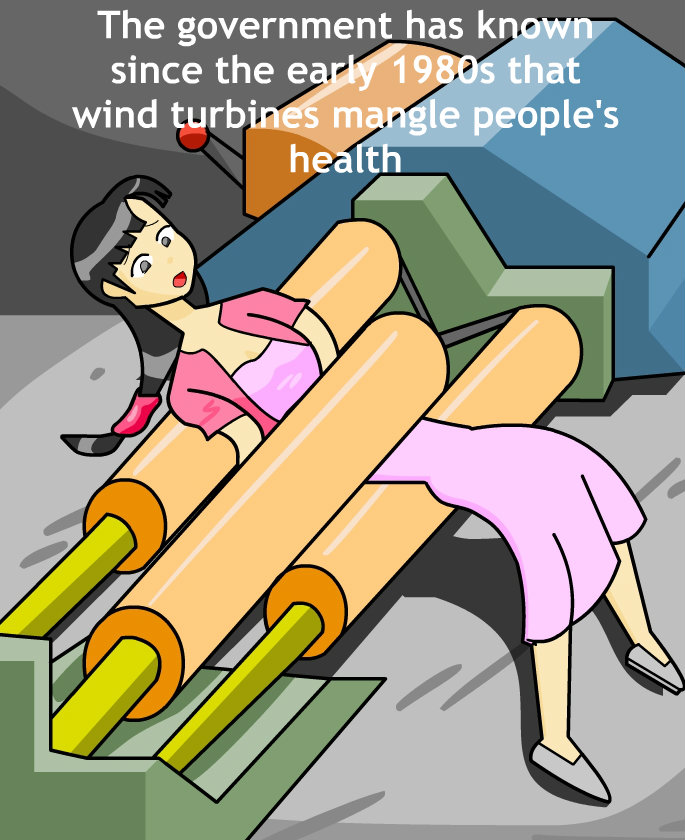 Health impacts caused by low-frequency noise from wind turbines have been known to US researchers and the renewable energy industry for more than 25 years.

A November 1987 report prepared for the US Department of Energy said the impact of low-frequency noise generated by wind turbines was often “confined to within surrounding homes” and that residents became more sensitive to the impact over time.

The laboratory experiments found that “people do indeed react to a low-frequency noise environment”.

The study, A Proposed Metric for Assessing the Potential of Community Annoyance from Wind Turbine Low-Frequency Noise Emissions, was prepared in response to earlier research into “acoustic disturbances” associated with the operation of a wind turbine near Boone, North Carolina.

It found that the standard A-weighted measure for sound was “not an adequate indicator of annoyance when low frequencies are dominant”.

The research was sent by an American acoustics expert to Australian wind health campaigners and has now been published internationally.

The US report built on earlier research by two NASA facilities and several universities. It was presented to the Windpower 87 Conference & Exposition in San Francisco by physicist ND Kelley from the Solar Energy Research Institute in Golden, Colorado.

Wind health groups in the US and Australia said although modern wind turbines were different to the one studied, the 1987 research was significant because industry noise-testing regulations had been specifically designed to exclude testing inside buildings and did not concentrate on low-frequency noise — the two main issues identified in the report.

A federal Senate inquiry recommended two years ago that in-house testing be conducted in Australia but it is not included in the present noise guidelines.

“This is the equivalent of taking a study about Ataris and applying it to the latest iPads,” Mr Marsh said.

The US research was conducted on older-model wind turbines which the CEC said were known to have noise problems as the blades were exposed to airflow patterns caused by the wind swirling its way through the supports of the trestle tower structure before flowing on to the blades.

“Australia has some of the toughest noise guidelines for wind power anywhere in the world and there is a growing body of more recent evidence that wind turbines do not produce enough low-frequency noise or infrasound to directly cause health problems,” Mr Marsh said.

But other research has shown that as wind turbines get larger, a greater proportion of the sound is emitted in the lower frequency range.

“The (US) research is highly relevant, even though the acoustic emissions themselves are different between old downwind turbines and upwind ones, where the turbines turn around to face into the wind,” Waubra Foundation chief executive Sarah Laurie said.

“What is important is the impact on the people from the sound energy emitted from the respective wind turbines, how it is experienced by them inside their homes and the acknowledgement that the symptoms are real, and that the symptoms may be perceived but not heard,” Dr Laurie said.

Health campaigners said the results of the laboratory simulations in the US study proved there was a direct cause-and-effect relation between the low-frequency noise and “annoyance”.

The National Health and Medical Research Council has said there was no published evidence linking wind turbines to health impacts. The NHMRC is conducting a review of its advice but its updated report on the issue is now overdue. The South Australian Environmental Protection Agency has recently completed a major sound monitoring program at Waterloo where there have been significant complaints from residents, but the results are not yet available.


Comments Off on “Wind turbine dangers known since ’87 ” (Australia)