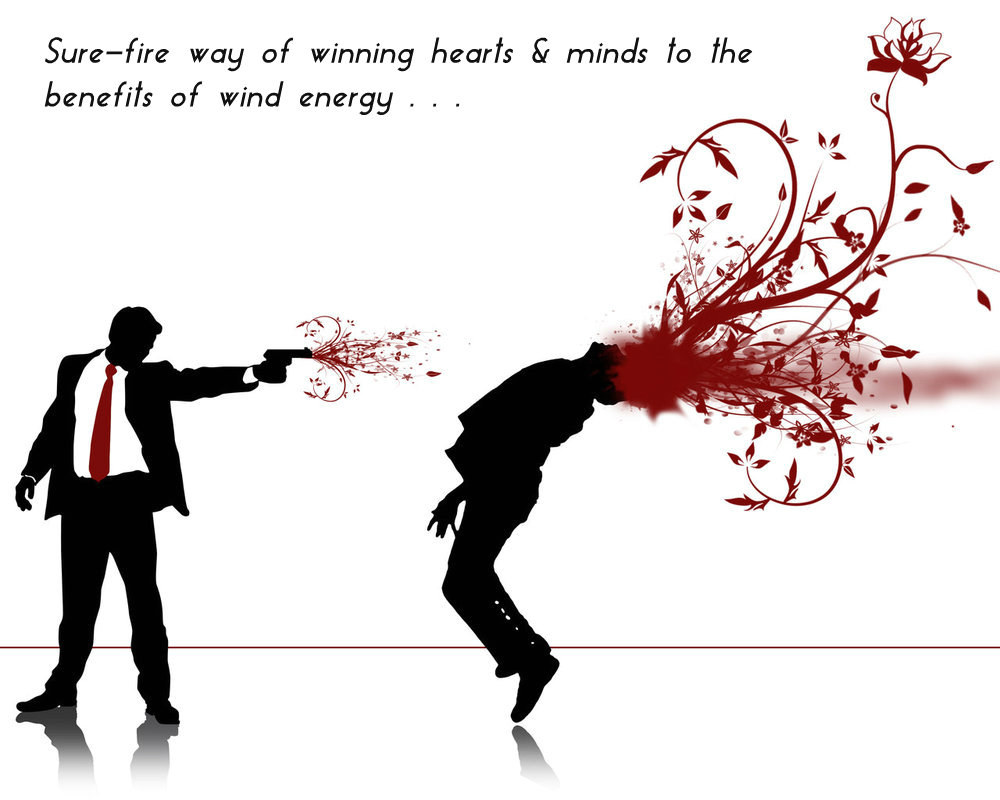 Editor’s note:  Mexico.  State of Oaxaca.  The Zapotec have occupied this landscape since time out of memory — even before Cortes splashed ashore carrying the Spanish flag, a bible, and smallpox.

The conquistadors are back, this time with wind turbines — and firearms.  The new invader being the wind energy giant, Fenosa.

Before going further, familiarize yourself with Fenosa’s policy on “health & safety.” 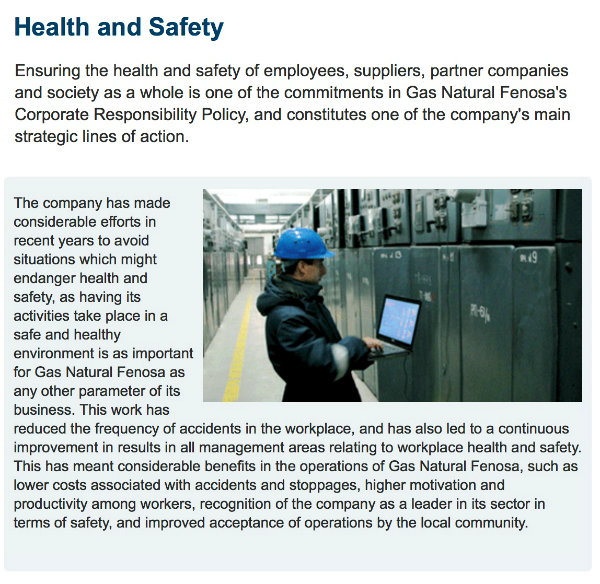 Committed to “ensuring the health and safety of . . . society as a whole,” Fenosa’s Corporate Responsibility Policy has “improved acceptance of operations by the local community.”

Not in Oaxaca.  Locals say that Fenosa, in collusion with corrupt (bought-off?) government officials, co-opted communally-owned land, precious to the indigenes for its farming, fishing, and other sacred qualities.  Now usurped for wind turbines.  Lots of colossal turbines, being erected mere hundreds of meters from people’s homes.

When residents formed a protest group — as tens of thousands of people around the world have done — and began blockading roads and holding demonstrations, Fenosa responded — by shooting them.

So says the beleaguered protest group, the Popular Assembly of the Juchiteco People (APPJ).  (Forget about the sham public meetings, forget about phony environmental impact reports and bogus health studies.  Just shoot ‘em!  Shoot ‘em to save the earth from global warming, by God!)

Héctor Regalado Jiménez, opponent to the wind-energy projects and sympathizer of the Popular Assembly of the Juchiteco People (APPJ), died on 1 August [2013] in the city of Juchitán de Zaragoza as a consequence of the injuries he sustained due to the six gunshot wounds he received on 21 July [2013].

According to a denunciation from the APPJ, Héctor Regalado and other members of the organization were fired upon by hitmen working for the multinational energy firm Fenosa Natural Gas, being accompanied also by units of the Auxiliary, Banking, Industrial, and Commercial Police (PABIC), a police institution that has been contracted by the firm to safeguard the construction work of the wind-energy park Bii Hioxho. (Click here for source.)

Wind energy.  “Clean, green, renewable!”  Oppose it and you’re dead!  Oaxaca’s new slogan.  (Pump him with 6 bullets, to be certain you kill the bastard, not just wound him.)

Did Fenosa hire the killers?  Who’s to know?  The point is, the local Popular Assembly of the Juchiteco People (APPJ) maintains it did.  If it didn’t — if, instead, these are  freelancing thugs acting on their own, without Fenosa’s blessing — what is Fenosa doing to condemn and stop the intimidation and killing?

Weeks before the attack, persons identified as hired gunmen threatened Héctor Regalado with death and warned him that they would fire on the APPJ [wind energy protest group] camp on the Playa Vicente access road, which is the location of the site where the multinational [Fenosa] is building the Bii Hioxho wind-energy park. Furthermore, days after being threatened with death, Héctor Regalado warned that representatives of the multinational had attempted to co-opt him by offering him work, in exchange for his abandoning the APPJ campaign.

On 24 February 2013, indigenous residents and Binniza fisherfolk founded the APPJ in the fishing village near Juchitán de Zaragoza. This organization asserts as its principal objective the struggle against the construction of megaprojects [industrial wind plants] on their lands and territories. As a first action, APPJ members blockaded an access road in Playa Vicente so as to impede the movement of workers and vehicles owned by Fenosa.

The residents denounce that the rented lands are of communal use, and that the contract signed between them was illegal.  Since its founding, the APPJ has denounced the constant death-threats and attacks suffered by its members at the hands of the state police and private hitmen hired by the firm.The APPJ “holds the state government of Oaxaca and the State Attorney General’s Office responsible for the wave of death-threats and aggressions that we as members and sympathizers of the [APPJ] constantly suffer.” (Click here for source.)

Some 1,200 agents from the police forces of the southern Mexican state of Oaxaca tried unsuccessfully on March 26 [2014] to remove local residents who were blocking a road leading to the Bii Yoxho wind farm, which is under construction in Juchitán de Zaragoza municipality near the Pacific coast.  The operation was also intended to recover construction equipment protesters had seized on Feb. 25 in an ongoing effort to stop the completion of the wind project, which is owned by the Mexican subsidiary of the Spanish company Gas Natural Fenosa.

Several companies have been building wind farms in southeastern Oaxaca on the Isthmus of Tehuantepec.  Residents in the Juchitán area, mostly from the Zapotec and Ikoots (Huave) indigenous groups, say the Bii Yoxho project is being built in an area they use for fishing and farming that also includes ceremonial sites, along with mangrove forests that are critical to the local environment.  The barricade blocking access to the Bii Yoxho project on the Juchitán-Playa Vicente road is one of four main points of resistance to the wind turbines.

Activists have also occupied the town hall in San Dionisio del Mar since January 2012; have refused to recognize the mayor in San Mateo del Mar, Francisco Valle, because he favors the projects; and have set up a barricade in Juchitán’s Alvaro Obregón neighborhood to block access to another wind park, owned by the Mareña Renovables company.

The resistance has been subjected to police harassment, such as the 24-hour detention by federal police of Lucila Bettina Cruz Velázquez, a leader in the Assembly of the Indigenous Peoples of the Tehuantepec Isthmus in Defense of Land and Territory, in February 2012.  Protesters also report the presence of armed paramilitary groups, some with connections to unions and other groups affiliated with the centrist Institutional Revolutionary Party (PRI) or close to the center-left Party of the Democratic Revolution (PRD).

On March 21 a group of men linked to Juchitán’s PRI mayor, Francisco Valle Piamonte, briefly detained reporter Rosa Rojas and photographer Francisco Olvera, both from the left-leaning national daily La Jornada, along with three reporters from alternative media and a San Mateo resident.  On the morning of March 29 a paramilitary group dismantled Radio Totopa, seizing a laptop and the transmitter and cutting the power cables, according to the Popular Assembly of the Juchiteco People (APPJ).  APPJ spokespeople called this “another attack by the state government and the transnational companies which are trying to use violence to silence the voices of those who oppose the construction of wind parks.”

After negotiations with representatives of the Oaxaca state government on March 28, the APPJ returned 12 vehicles, including a backhoe, to Gas Natural Fenosa; in exchange the state agreed not to press charges against the protesters.  However, the APPJ rejected the state’s proposal for them to lift the road blockades on April 1 and attend an April 2 meeting in the city of Oaxaca.  The protesters said they would maintain their barricades, and they called on Oaxaca governor Gabino Cué Monteagudo to come meet with them in Juchitán.

And you folks in Wisconsin, Ontario, and Australia thought you had it tough with the wind thugs!