“Wind Energy: Chalk it up as a loss” (Huffington Post) 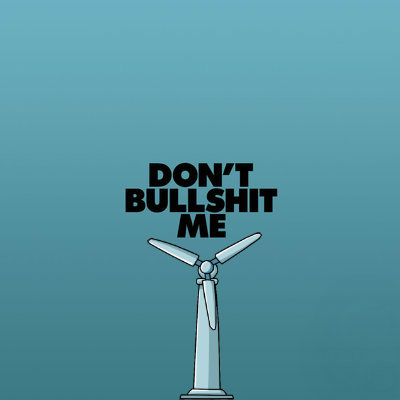 Editor’s note:  Click here for the video accompanying this editorial.  We’d like to dedicate this piece to Geoff Leventhall and Simon Chapman, two ardent enablers of  wind energy.  The former is a physicist.  The latter, risibly, a sociologist.  Neither seems capable of grasping that wind energy is, through and through — horseshit.  (Yes, this includes the physics of wind energy.)  That it’s absolute horseshit — or worse.  Both men dismiss and, in Chapman’s case at least, openly ridicule Wind Turbine Syndrome.  History will judge them harshly.  That historical reckoning begins with Acheson’s editorial, below.

Another week, another plethora of news reports attacking wind farms. The latest headlines include; November date for Trump’s wind farm challenge”, “Approval for wind turbines sparks protest at ‘ring of steel'” and “Wind turbines may be killing bats by ‘exploding’ their lungs”, to name but a few. Yet will the stories about Donald Trump, exploding bats and Scotland’s version of the Iron Curtain help to stem the spread of mammoth turbines across our land and seas?

Still, it was only two years ago that anyone who publicly opposed wind turbines was considered a social pariah and practically ostracised from society as if they were modern-day lepers. Things have changed. Not a day goes by without a new story slamming wind energy or highlighting the increasing wind farm opposition across the UK. Just as it was once popular to support wind energy, it has almost — almost — become fashionable to oppose wind turbines.

The problem is that many of the news reports are nothing more than filler. If they are printed on a Tuesday, they are forgotten about by Wednesday; such is the nature of the fast-paced, up-to-the minute, 24-hour news cycle that is available to us. Despite the constant barrage of anti-wind press, the spread of massive industrial wind turbines continues unabated.

In the last year alone we have seen news reports outlining how wind farms have surrounded some of Britain’s most untouched landscape and blighted some of our most bucolic and treasured towns and villages. We have heard horror stories about planning departments ignoring guidelines and forcing homeowners to live next to monstrous whirling steel turbines. We have been warned that property values have plummeted due to the inappropriate placement of wind farms and we have seen hundreds of anti-wind protest groups spring up across the nation, incensed at the lack of democracy in the planning system.

We have read how turbines impact human health and after years of mockery from pro-wind groups, we now have the first peer-reviewed, science-based report confirming that turbines do have harmful impacts on humans.

We have watched videos of turbines exploding in high winds and crashing to the ground in storms. We have witnessed precious habitats and ecosystems torn apart to make way for turbines and we have seen stories about birds being chopped to bits. We have heard how offshore wind farms will destroy precious undersea carbon stores, affect aquatic animals and close important fishing grounds.

We have been told that the tourist industry will be damaged and the golf industry will take a hit. We read explanations of how sailing routes will be impacted and even how Britain’s strategic nuclear deterrent could be hampered. The Ministry of Defence has objected to many wind farms which will affect radar systems and we have even seen how turbines could prevent the detection of secret nuclear weapons tests.

Mountaineers, ramblers, cyclists, equestrians, aviation enthusiasts and bird-watchers have protested. Celebrities have come out to support anti-wind campaigns. Members of every political party, except the Greens, have spoken out against turbines. Over 100 MPs petitioned David Cameron to stop the madness. Members of the European Parliament have repeatedly urged the European Commission to get involved. The Scottish Government has received 10,000 objections from people who oppose wind farms – and that was just for large developments (>50MW).

We have read that schoolchildren are being utilised as pro-wind propaganda tools and we have even seen how the United Nations has ruled that the UK is in breach of international law regarding public participation and the right to receive information in regard to wind farm developments. In the last few weeks, we have heard how IPCC climate change projections, which formed the basis for renewable energy targets, have been called into question by leading scientists.

We have watched as turbines have had to be shut down in high winds and how consumers foot the bill when they are. We have seen their minimal contribution the UK energy supply, even when they are needed most. We have been affected when energy bills have skyrocketed thanks in part to a misguided focus on wind energy. Unfortunately we have also heard how millions of households have been forced into crippling fuel poverty, now having to choose between food and fuel.

We have read about noise abatement orders and residents’ legal challenges. We have seen some communities torn apart by wind farm proposals and others handed bribes in return for their silence. We have read how landowners pocket exorbitant amounts of cash in return for housing turbines and we have seen developers reap vast profits from the UK’s subsidy regime. We have heard how peat bogs have been ripped up and forests torn down to make way for wind farms. We are now being told that wind energy has not made even the slightest difference to carbon emissions.

We have even seen those who peddle ridiculous pro-wind arguments about green jobs debunked and refuted. There is enough credible evidence and enough of an opposition to end a policy of support for industrial wind energy. Yet still we see wind farms popping up all around the country.

.
Ben Acheson is the Energy and Environment Policy Adviser and Parliamentary Assistant to Struan Stevenson MEP at the European Parliament in Brussels. In addition to his expertise on Energy and Environment issues, he has an in-depth knowledge of regional security in Central Asia, animal welfare within the European Union and EU-aspects of the Scottish independence debate. In his spare time, Ben writes for www.thinkscotland.org and plays semi-professional American Football; in 2012 he was unanimously voted as the National Player of the Year in Belgium.