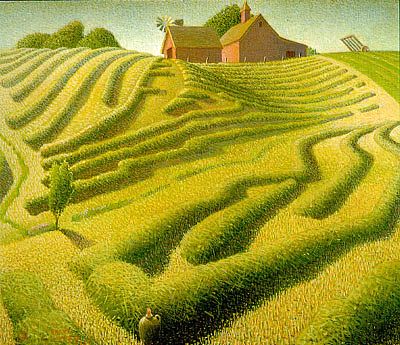 “I had no health problems previously,” says a somewhat sleepless Jessica Nuhn. “I’m a registered nurse—a critical care nurse. I’ve got my bachelor’s degree and I know about health.  Since the turbines have been spinning, I’ve had headaches….The noise has kept me up at night, the noise gives me headaches, the noise crushes my sinuses.”  Nuhn says she’s never had sinus problems before, and now she sees floating spots, for which she’s seeing a doctor.  “I’ve never had headaches and now I do,” she said.

SHELDON, New York—Call it the flip side of paradise.

Jessica and David Nuhn’s living room starts pulsing about 7:35 p.m. on a Friday evening. The entire room darkens and brightens rhythmically, cycling a little faster than once per second.

The effect is like something from a 1950s black-and-white monster movie.

Paul Zawadzki of Eagle knows the phenomena well himself. He calls it psychedelic, and old-fashioned strobe lights indeed come to mind.

The pulsing blobs are shadow flicker from one of the windmills at the edge of the High Sheldon Wind Farm. It’s not what the Nuhns expected when they bought their dream house in 2006.

“Since we’ve owned this home, I had no health problems previously,” says a somewhat sleepless Jessica Nuhn. “I’m a registered nurse—a critical care nurse. I’ve got my bachelor’s degree and I know about health.

“Since the turbines have been spinning, I’ve had headaches….The noise has kept me up at night, the noise gives me headaches, the noise crushes my sinuses.”

Nuhn says she’s never had sinus problems before, and now she sees floating spots, for which she’s seeing a doctor.

“I’ve never had headaches and now I do,” she said. “I’m high-stress now, and I’m very used to dealing with high-stress situations, and I can’t even handle coming home anymore.”

·
The Nuhns were among six individuals or couples from Sheldon and Eagle who met at their house that evening.

They were joined by Councilman Glenn Cramer of Sheldon—who has long raised wind turbine concerns with the town—and Hal Graham of Cohocton.

Graham signed a lease for a turbine on his property, but has since made his regrets public.

With the exception of Cramer, who said he isn’t directly affected, the individuals described or documented problems similar to what the Nuhns have experienced.

High Sheldon came on-line in March, and is now producing energy for the state’s general power grid. The facility includes 75 turbines, each about 400 feet tall.

For these particular residents, the giant windmills have proven a nightmare. Although some opposed them from the beginning, the Nuhns said they’d taken no major interest when they bought their house.

Jessica started noticing the effects after the farm was built. Even her husband David didn’t really believe her, until he said he spent a full day at home, shortly after she started voicing her concerns.

“I didn’t notice it, but I wasn’t home as much as Jessica,” he said. “All of a sudden, being down the hill, you just realize how loud they are.

“I don’t care what anybody says,” he continued. “They say it’s as loud as a refrigerator, but you cannot hear your refrigerator from half a mile away. It’s definitely louder than that.”

What the residents described on two Fridays ago was a low rumbling, similar to a jet engine’s “whoosh” which never leaves the area. They said it’s occasionally punctuated by a sudden, loud bang.

The loud noises are one thing, they said, but the low rumbling is the worst. They said it’s overwhelming, and maintain it’s louder than the 50 decibels allowed by Sheldon’s zoning laws.

The noise is much worse at night, once the area’s ambient noise is gone, said Nadja Laska, another resident affected.

Several of the impacted residents said they’re having the noise levels tested professionally.

The noises may come and go, they said, and are in addition to the shadow flicker, which lasted about 40 minutes that Friday evening. It filled the room despite the Nuhns’ drawn curtain.

Beyond that, the couple said their cellphone reception has become spotty, and many residents described problems with their television reception. Laska showed a video in which her screen was occasionally scrambled, and seemed to pulse in time with the shadow flicker dominating her living room.

Zawadzki said he approached Department of Conservation officials at the local level. He said he was told to call Albany, where officials told him they didn’t handle such issues.

The Sheldon homeowners said they’ve made numerous calls to Invenergy’s hotline—talking to people in the Chicago office, before dealing with local representatives.

They said there are no results, even when Administrative Assistant Mary Kehl visits their locations to register their problems. They describe any such interactions with the company as ineffectual.

The entire process, involving formalized complaints, leaves them with little hope their problems will ever be relieved. They say they need to first prove they’re being harmed.

And even if they do, they believe there would be some way for the information to be overturned, again blocking any hope of relief.

They compared the process to jumping through hoops.

They likewise don’t want be seen as crazy or unreasonable, but conveyed a sense of being overwhelmed by the issue. They expect to get no real or effective help from the company, and Laska said she first complained in February.

Nuhn, who’s studying for her master’s degree, said they don’t want people think they’re a group of ignorant hicks—they know what they’re talking about, and their complaints are very real.

She said she grew up near railroad tracks in Alden, so she knows what a noisy environment’s like. But she’s never experienced these kinds of issues before.

In the meantime, the impacted residents are dealing with the nightly noise, shadow flicker and other effects.

Invenergy’s offered to supply shades or plant trees, some of the residents said. They believe, however, any such steps are beside the point.

Jessica Nuhn said she doesn’t want to live with her shades drawn, or sleep with the windows closed and an air conditioner running, to try to drown out the noise. She said it’s the opposite of why she and David bought their house in the country, in the first place.

Such complaints are not uncommon, and the state’s wind energy task force has received several such reports, said Wyoming County District Attorney Gerald Stout, who’s himself a task force member.

Those residents face a Catch-22 situation if they can’t complain to the Department of Environmental Conservation [DEC], and believe the wind energy companies or local officials aren’t responding sufficiently.

“I don’t know where to refer them at this point,” Stout said. “We still haven’t figured that out….Since Invenergy hasn’t agreed to sign the Attorney General’s code of conduct, the only thing I can recommend is they contact the State Attorney General’s office directly.”

He said he hasn’t received any such complaints from Sheldon or Eagle in his role as district attorney, although the task force has.

“[The affected residents] realize now the wind task force and the attorney general’s are going to be doing anything, if anybody’s doing anything,” he said.

A state DEC representative confirmed on Thursday that the agency doesn’t handle wind turbine issues. They’d instead be recommended to local jurisdictions such as code enforcement.

·
The residents believe everybody’s affected differently, and not everybody will show negative effects from the wind turbines.

Some residents will be fine and others are more sensitive, Laska said.

But at the same time, the residents said the wind farms are wrecking their lives, and they’re left with few options.

Cynthia Blair said she and her husband Ken had lived in town for three decades, and are facing the hard choice of selling their house at a loss, if they wish to leave the area.

That dilemma has indeed been a concern for Cramer, who pushed unsuccessfully for a townwide property protection act, before the Town Board and town Planning Board each approved the permits for High Sheldon two years ago.

“Anybody that’s hurt like this should be given their money and given the option to go someplace else,” he said.

Not that they’d have necessarily wanted to leave. But the residents feel trapped, if they can even sell their houses.

They believe they have few real options in the overall situation. They say selling at a loss, or abandoning their properties, would be a desperation measure.

Zawadzki said the state has a disclosure law, so prospective buyers would need to be informed exactly why a homeowner’s leaving, making the house much less attractive.

The disclosure form requires property owners to list and describe any ownership, environmental, structural or mechanical problems to a prospective buyer or realtor, before a sale goes through.

“We are looking at other properties,” Jessica Nuhn said. “The best we can do is wait for the market to get better….But to even consider moving out, that’s got to be quite an impact.”

It’s not about the money, the residents said. Nor do they begrudge the people who signed lease agreements or easements.

None of the residents gathered Friday said they’re receiving compensation for the turbines, and they say the elimination of their town taxes—about $600 annually—definitely wasn’t worth the overall cost.

Not with the noise, the sleeplessness, the bizarre, pulsing shadows and overall impact on their lives.

“I want you to hear, loud and clear, and make no mistake,” Laska said. “I begrudge my neighbors nothing. Not one penny. Nothing at all.

“But I don’t know how long I can take it, OK?” she continued. “I don’t owe anybody the comfort and the quality of life inside my house.

“It’s not about money for me. It’s about living my quiet, peaceful, humble life. That’s what I want. My quality of life.”