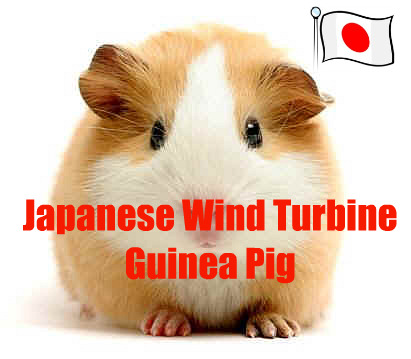 “According to the formal complaint, the residents have said that in the 18 months since the plant went into operation, those people living within 1-2 km of the wind farm have been suffering from a range of ailments including severe headaches, dizziness and buzzing in the ears. This is not the first time such complaints have been made by people living near wind farms, but it does appear to be the first time that such complaints will be formally investigated by the [Japanese] Environment Ministry.”

“Going with the wind”

An article in the Nikkei recently may well spell trouble for the fledgling alternative energy industry—and particularly for the wind power generation sector, where most energy investment has taken place in Japan. Apparently residents in the town of Toyohashi, Aichi Prefecture, have petitioned a wind turbine farm operator (Nikkei doesn’t mention who) to close down their plant in the evening hours—on the basis that low frequency noise emanating from the wind farm is causing residents in the area serious health problems.

According to the formal complaint, the residents have said that in the 18 months since the plant went into operation, those people living within 1-2 km of the wind farm have been suffering from a range of ailments including severe headaches, dizziness and buzzing in the ears. This is not the first time such complaints have been made by people living near wind farms, but it does appear to be the first time that such complaints will be formally investigated by the Environment Ministry.

This could become a serious issue, because Japan has become increasingly committed to wind power, installing thousands of wind farms around its coast line so as to reduce national dependence on foreign hydrocarbon energy sources. If it is found that low frequency sound is a genuine health hazard, then future farms will probably be subject to more restrictive legislation, which will at least require them to be located further away from inhabited locations—something hard to do in overpopulated Japan.

Apparently, Japan now has about 1,500 wind farms generating around 1.86 GW of electricity (FY 2008). The installed base is expanding at a rapid clip, up 1,300% in terms of energy produced in the last eight years, and production is likely to grow another 20% (my estimate) next year. The largest operator, with about 20% of the nation’s capacity is Eurus, which is a joint venture between TEPCO and Toyota Tsusho—two of Japan’s most powerful companies. As a result, wind will probably continue to be the fastest growing alternative energy source in Japan, certainly more so than solar, hydro, and geothermal.

Perhaps the reason that the Environment Ministry is paying attention is because last year a new illness, dubbed Wind Turbine Syndrome (WTS), was identified by New York-based pediatrician, Nina Pierpont. Pierpont studied the health problems of 10 families living close to wind farms and concluded that the installations are probably causing an outbreak of sleep disorders, accelerated heart disease [this is inaccurate—Editor], panic attacks, headaches, learning problems by children, and other stress-related disorders. She took her claims to Congress, and testified in late summer last year, as to the problem.  [Nina Pierpont has not testified before Congress, only before an energy committee of the NYS Legislature—Editor.]

In Pierpont’s research, and indeed, from the complaints that have been trickling in from all over Japan as well, these ailments appear to manifest themselves within days of a nearby wind farm going into operation and so are easy for people to associate with the turbines. If the health claims turn out to be true, then according to Pierpont, one effective measure is to establish a minimum 2-km buffer around each wind installation, with possibly greater distances if the farm has line of site, is upwind, or is otherwise able to cause direct sound and sight disturbances to residents.

There has been substantial research done into wind turbines and health, and it seems that if there were any negative health influences, they would be from possible low frequency noise, not from visual or other effects. Research shows that most large turbines do generate noise, some of which is in the audible spectrum, but most of which occurs in the 10 Hz to 50 Hz range—well outside the range of hearing.

However, Pierpont says that while you may not be able to directly hear the beating of the air by the turbine blades, according to what she is seeing, people are still “feeling” the turbine vibrations. She thinks that the low frequency beats are resonating in the inner ear and disrupting the hearer’s sense of balance and spatial orientation. This is leading to headaches and disorientation, and thus to the less clearly defined symptoms of anxiety, nightmares, and cognitive development problems in small kids.

As might be expected, noise experts have anticipated such claims and in 2005, a UK expert published a vigorous defense of wind turbines and the unlikeliness of their causing health problems. He went on record as saying that modern forward-facing turbine installations create very little noise and that which is created is attenuated over short distances. He is certain that no subsonic noise is heard or felt by human beings.

Pierpont’s response to such statements is to point out that while these experts may well be experts in sound, that does not make them experts in human physiology, nor have they investigated actual sufferers at actual sites. She has been challenging the energy industry to err on the side of caution and to at least implement the 2-km buffer zone.

I think that her recommendations sound reasonable, and with the tobacco debacle (i.e., industry claims that tobacco is not proven to cause lung cancer) fresh in our minds, there is no doubt that her claims need proper investigation—as I hope will happen when the Environment Ministry gets involved.

My hope is that rather than stop the further installation of more wind farms, that adequate protective measures will be put in place to ensure nearby residents are not impacted health-wise. If separation distance requirements can’t be achieved on land, and certainly it’s not just the sounds but also the sight of wind turbine farms that turn people off, then perhaps over-the-horizon off-shore installations are the way to go. The Japanese already have good experience in creating artificial islands and floating platforms, and so this would be reasonably easy (although more expensive) for them to achieve.

Alternatively, they could start moving toward smaller, less noisy installations. Much the way that personal solar cell arrays are being promoted. In my mind, the government should offer incentives for land owners to build their own personal wind turbine installations, feeding power back to the grid.
·


Comments Off on Japan's Guinea Pigs