"The feeling we get from the spinning turbines is not only heard, but felt in our bodies." (Ubly, Michigan)

“If you have ever felt a cement truck while the drum is mixing, this is the best way we can describe the feeling we are experiencing.” 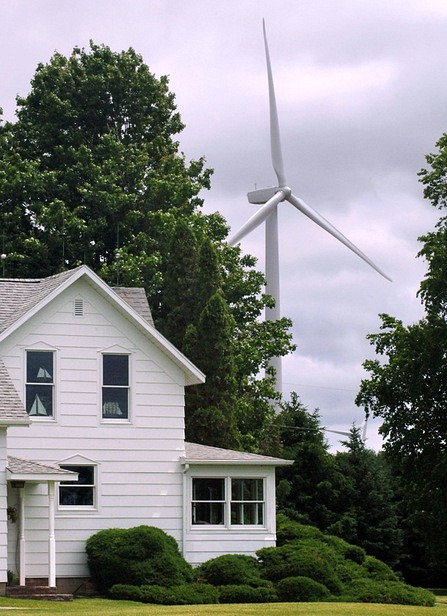 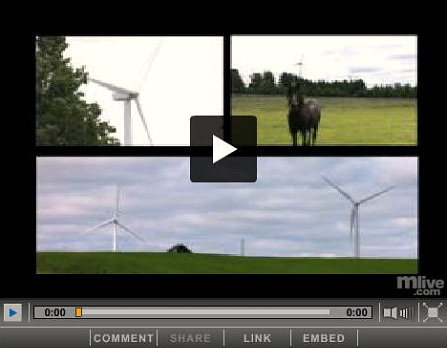 Click on the picture, above, to watch the video, courtesy of Michael Randolph, Bay City (Michigan) Times.

UBLY, Michigan—After receiving another letter from residents who say wind turbines near their Ubly-area home are creating noise disturbances, county officials said they still are in the process of developing a way to respond to complaints received following a wind park’s construction.”We thought it would be, as we were told from the beginning of the turbine project, ‘no louder than a clothes dryer,'” reads a letter David and Marilyn Peplinski sent to Huron County officials May 15. “Now we realize that no one wants to stand right next to a running clothes dryer 24 hours a day. This is the reality of it.”

The Peplinskis’ letter states while the audible noise level coming from the park has slightly improved with the spring thaw, the sound resonance has not.

“Our family’s ability to get [a] good nights’ sleep is dismal, to say the least,” the letter reads. “The feeling we get from the spinning turbines is not only heard, but felt in our bodies as well.”

The letter notes the family has never had sleep issues in the past.

“Now, on many evenings, it takes an effort for several of our family members to fall asleep. Then, our sleep is being disturbed many times throughout the night,” the letter states.

Marilyn and David Peplinski’s letter describes the feeling their bodies experience from low frequency sound waves created by nearby turbines as “like when a heavy truck travels by your home, and you can feel the rumble, except that this is a constant rumbling feeling.”

“If you have ever felt a cement truck while the drum is mixing, or the sound energy given off of a large drum when tapped, this is the best way we can describe the feeling we are experiencing,” the May 15 letter states.

The Peplinskis’ letter includes seven questions the couple felt need to be addressed by Huron County officials and John Deere Wind Energy. The questions, which are listed in the breakout box included with this article, include whether Michigan Wind 1 is in compliance with the county ordinance’s noise level maximum and what kind of monitoring method is being used to ensure the noise level is not exceeded.

Huron County Commissioner Dave Peruski, who represents the Ubly area, said he is planning to attend this evening’s Huron County Planning Commission meeting to see what can be done to answer the questions posed in the Peplinskis’ letter and avoid the same problems cropping up in the future as new developments are built in the area.

He said he would like to see a group come together that’s comprised of representatives from the county board of commissioners, planning commission, building and zoning office and John Deere Wind Energy, to develop a complaint resolution procedure.

“That’s the approach I think we need to take,” Peruski said.

Commissioner: ‘We have to take them seriously’

·
Peruski said he’s met with the Peplinskis and believes their complaints are not without merit.

“We have to take them seriously,” he said, noting there are varying degrees of the problems the Peplinskis are facing that others in the county could face in the future as future wind developments are created. It’s important, Peruski said, to ensure the county’s zoning ordinance is crafted in such a way to avoid these problems from being repeated elsewhere.

David Peplinski said it is his goal [that] these issues are considered in the siting and development of future farms in Huron County, because he wouldn’t wish the problems he and his family have experienced on anyone else.

He stressed he strongly supports alternative renewable energy projects, but feels the effects these projects will have on adjoining property owners need to be taken into consideration in the siting and zoning process.

Also, David Peplinski said, he is not a complainer and his family never wanted to be in the spotlight. Per procedure, his letter became public as soon as it was sent to the Huron County Board of Commissioners.

David Peplinski noted it wasn’t easy for him or his wife to submit the letter, particularly because they don’t want to hurt others in the community, because those living in the area are the family’s neighbors and friends.

As a result, he said he would also like to see there be a complaint mechanism created where, when someone is having an issue, it can be handled in a manner other than submitting a letter to the board that will become public.

Regarding the response David Peplinski said he’s received, he noted both the county and John Deere Wind Energy have been very polite and quick in responding to his concerns.

Noise complaints made in March

Shortly after the letters were received, commissioners discussed how to address complaints received from residents after a wind development has been constructed and begins producing power.

The letters, which were submitted by Ubly residents Randy and Angela Weber and Dennis and Darcy Mausolf, reported problems of extreme noise increases and outside noise that resembles a distant jet with an intermittent whoosh sound.

“Inside our house, we have a low hum vibration that sounds like a truck running outside. This noise makes sleep difficult,” reads the letter the Mausolf’s wrote March 10.

That letter, in addition to the one written by the Webers, was obtained by the Tribune in March via a Freedom of Information Act request.

At the time, county officials were discussing how to address the complaints, Huron County Building and Zoning Director Russ Lundberg noted the issue of measuring sound emitted from the turbines is more complex than just taking out a decibel reader to measure whether noise levels at/near Michigan Wind 1 exceed limits set in the county’s zoning ordinance.

Sound is measured by using units of decibels (dB), and A-weighting, which compensates for the sensitivity of human hearing. A-weighted sound levels are measured by dB(A).

The county’s zoning ordinance’s primary noise standard states noise generated by an operating wind turbine can not exceed 50 dB(A) at all nearby sensitive receptor locations, which includes residents. The ordinance includes a second standard of ambient +5 dB(A), meaning at times sounds created by a wind turbine may cause total ambient noise to exceed 50 dB(A).

In March, Lundberg explained at some locations, particularly during late and early hours, operations of a wind turbine facility significantly increase ambient noise levels. For example, on a night with low wind speeds and little traffic and other outside activity, there may be an ambient rating of 20 dB(A). That rating may double when turbines are in operation, however, the overall limit of 50 dB(A) is not exceeded, though the noise of the wind park is noticeable.

In the daytime, particularly when there’s increased wind speeds, there’s other ambient noise—such as leaves rustling in the wind, cars on the road, tractors in fields, etc.—the sounds of a turbine in operation may not even be noticeable because it’s drowned out by the other ambient noise.

With this in mind, the issue is how to determine whether the 50 dB(A) levels are being exceeded and, if so, whether it’s being exceeded by the actual turbines themselves or by a combination of the turbines and other existing ambient noise sources.

Because wind projects have to submit a noise study to prove a wind farm will not exceed the 50 dB(A) limit, the county’s assumption is it’s not the turbines themselves that are exceeding the 50 dB(A) level, Lundberg previously noted. But how to check this assumption is the question officials were mulling over in March.

That is because in order to check the wind park’s noise levels, the other ambient noises would have to be identified through a noise study.

·
During March’s discussion, it was noted the county has three possible options. First, the county could have John Deere Wind Energy conduct a wind study, Lundberg said. Another option for the county would be to go it alone, by purchasing the necessary decibel metering equipment and have Lundberg learn the noise consulting expertise needed to conduct a noise study.

The planning commission included those fees for post-construction matters so it would not take any money away from the county’s general fund if additional review is required after a wind park has been developed, Lundberg explained in March.

During March’s discussion, it appeared the board favored pursuing the first option, that’s a teamwork approach with John Deere Wind Energy.

Since that meeting, Huron County Commissioner Kurt Damrow—who chairs the Legislative Committee, which has been charged with following up on this issue—has said the county planning commission more than likely will make an amendment to the county’s wind ordinance to include a section that deals with how to address complaints made after a wind park’s constructed.

“We just want to work with the planning commission to come up with a … thorough and specific procedure,” Damrow said.

He noted identifying and correcting any problems a wind farm may be causing will only benefit the wind park’s purchaser and developer. That is because the projects currently are under warranty and any repairs/replacements that need to be made will be covered by under warranty from the turbine’s manufacturer for the first year or two after the project’s been constructed, Damrow said.

Questions he said need to be addressed include what is a legitimate complaint, and what—if any—burden should be placed on the developer as far as proving the wind farm is in compliance with the zoning ordinance.

Another solution Damrow said has been proposed is increasing the county’s setback distance, which is the minimum distance a turbine can be placed to an existing structure, from 1,000 feet to 1,320 feet.

Damrow said this is a standard DTE Energy officials told him they would be on board with. He added existing wind farms will be grandfathered in at the current 1,000-foot setback.

Also, Damrow said the county discussed obtaining a meter to get an immediate readout of sound so the county could independently monitor sound levels.

Damrow said the county needs the business the wind industry has given the area, however, the well-being of the residents cannot be compromised if developers cannot meet the established wind ordinance in Huron County.

“They’ll have to do whatever it takes to make sure they meet the ordinance requirements,” Damrow said. “We don’t want any undue burden on our residents, and we’ll do everything we can to help everyone.”

·
1. Does the county have the ability to monitor the county’s zoning ordinances on the noise level?

2. Has John Deere Wind Energy been in compliance with the noise level ordinance since they began operation?

3. How is John Deere Wind Energy going to maintain the turbine noise at or below the ordinance?

4. What method of documentation is going to be used to show compliance?

5. Has the noise level been above the ordinance maximum level?

6. What monitoring method is being used to ensure the noise level is not exceeded?

7. What is the county’s ordinance on inaudible low frequency noise waves?


Comments Off on "The feeling we get from the spinning turbines is not only heard, but felt in our bodies." (Ubly, Michigan)