Retired pharmacist speaks to Killaloe, Hagarty and Richards about the effects industrial wind turbines had on her health
· 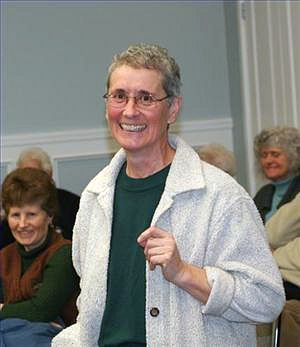 When Carmen Krogh talks about the health effects of wind turbines, she speaks from experience. She shared that experience with the councillors of Killaloe, Hagarty and Richards Township at last week’s regular meeting. Extra chairs had to be pulled out of storage to handle the large crowd that came to hear her presentation to council.

Krogh has been involved with health care for more than 40 years; she is a retired pharmacist; she was the director of pharmacy at Edmonton General Hospital; when she moved to Ontario, she set up the drug information pharmacy at Ottawa General Hospital, where she researched drug therapies and advised doctors. For 15 years, she was the director of publications and editor-in-chief of the Compendium of Pharmaceuticals and Specialties (CPS); she was an acting director for Health Canada’s Pesticides Agency and has sat on numerous boards and committees dedicated to health. She has also lived near wind turbines.

Her symptoms came on quickly, she said. She experienced bad headaches, dizziness, queasiness, a heart rhythm sensation and a vibration inside her body. Her health improved when she and her husband, who was not affected, left the area. She decided to research the issue.

The Canadian Wind Energy Association says there is no evidence that turbines adversely affect human health, Krogh stated, but emerging research to the contrary is building momentum. In 2006, the National Academy of Medicine in France recommended an epidemiology study be done. Epidemiology, Krogh said, is the “holy grail for public health research. It investigates adverse effects in public health and gives doctors guidance on what could be a health risk and what to do about it. It’s something the medical community depends on.”

Krogh referred to a study of 10 families conducted by Dr. Nina Pierpont, whose book about wind turbines and health effects is soon to be released. She studied the families before the turbines were erected and after their installation; nine of the families have moved away permanently and the other would like to but cannot afford to move. Dr. Pierpont also recommended an epidemiology study be conducted. The Wind Energy Association disagrees with Dr. Pierpont’s findings, and raised questions about the scientific validity of her research (even though her book has not yet been released), Krogh said.

Krogh also brought up the findings of Dr. Robert McMurtry, who originally wanted to host a set of wind turbines on his property. After researching them, he too became concerned about the effects on human health. In November of 2008 he did a deputation to Prince Edward County and suggested the county shouldn’t proceed in development until authoritative guidelines are in place–guidelines based on epidemiology specifically targeting health effects. One mayor in the county stated it didn’t mean the county was against wind energy, but it would give council time to get answers to the questions that citizens should be asking.

“We’re the citizens and we should be asking questions,” said Krogh.

She went on to list the core symptoms people have reported: headaches, unsteady balance, nausea, sleep problems, anxiety, irritability, depression, problems with concentration and memory. Trouble with sleep is very serious, she added.

“Sleep deprivation can lead to serious medical problems,” Krogh said. “According to Amnesty International, it is a tool for torture, so it’s not trivial.”

Though the health issues are not limited to one group, pre-existing health conditions can be made worse by the turbines; for example, more frequent and severe migraine attacks can be triggered; balance can be affected by the visual disturbance of moving blades or shadows of the blades on the ground. Some people are affected quickly and others don’t develop symptoms for two or three months. The cause of the effects is low-frequency noise, which, Krogh said, affects the body’s neurological system.

“In our haste to capture wind, there is no voice heard for public health, and when it is heard, it’s routinely ridiculed,” said Krogh.

As studies progress, the distance for setbacks of the turbines grows. The general setback for the turbines now is greater than 250 metres; more and more researchers say that distance should be 1.5 to 3.5 kilometres.

Krogh gave examples of “victims” of the wind turbines. One was a healthy Shelburne woman who had 11 turbines west and east of her home. Both she and her husband developed health problems–even their dog was adversely affected.

“They believed the government, they believed the wind companies,” said Krogh. “Everyone said, ‘Don’t worry, we’re not going to make the same mistakes as in Europe,’ but these people are suffering.”

She talked of the HIV blood scandal of the 1980s, where mounting evidence about tainted blood was ignored for a long time.

“Public health scandals happen and I’m almost on the verge of saying the wind issue will be one,” Krogh said.

More researchers are calling for an epidemiology study.

“They’re not saying stop this; they’re saying let’s harness the wind responsibly and make sure we get this right about where to put (the turbines) and how far away from people,” she said. “In the meantime, we should invoke the precautionary principle.”

Krogh has started a letter-writing campaign and said now is the time to voice concerns to federal, provincial and municipal governments. She urged everyone to send out letters as well.

“Maybe it needs a groundswell from the public as a whole to say that we need to look into this further,” she said.

Krogh commended council for passing the resolution urging the Province of Ontario to place a moratorium on wind farms until the effects are better understood.

“I think you did a very good job with your resolution,” she said. “It raises the concern higher up. It’s important municipalities express concern. It’s about the politics now.”


Comments Off on "Woman tells a tale of turbine torment." (Ontario, Canada)