A disgrace to science and public health (Massachusetts)

·
Editor’s comment:  Read the following news story of a recent meeting between a group of residents (Falmouth, MA) and the town Board of Health (BoH).  The former, quite reasonably, asked the BoH to intervene in the egregious matter of the wind turbine which is making these people ill.  They presented both their own illness and worldwide evidence for the same—global Wind Turbine Syndrome.

We’re sorry, Misters Donald and Cool and Murphy and Ford, but our epidemiological metric tells us you’re not really sick.  You may think you’re sick.  And it’s conceivable that with your obvious irritation and angst, you’re making yourselves sick.  However, until we read an article in the New Eng. Jour. of Medicine letting us know this turbine is in fact making you ill—well, frankly, we simply can’t believe you.

To repeat, our metric, our science, our hocus pocus tells us we can’t believe you when you say it’s from that turbine next door.  Remember, we all have PhD’s in epidemiology and science and stuff.  This means we’re smart—certainly smarter than you are about what’s making you ill.

Besides, it’s a political issue and source of revenue for the town.  We don’t get involved in that stuff. 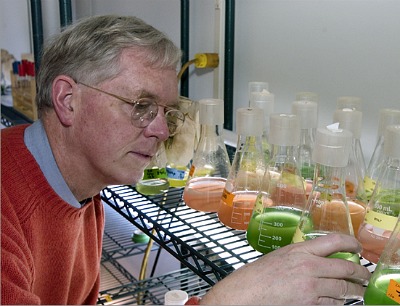 Dr. John B. Waterbury is a member of the Falmouth Board of Health.  He’s a specialist in the “purification, developmental patterns and properties of some fresh water and marine cyanobacteria belonging to the orders Chamaesiphonales and Pleurocapsales” (title of PhD thesis)—presumably gazillions of which are swimming around in those brightly colored beakers.

But what expertise do Waterbury and his colleagues on the Board of Health have in old-fashioned, off-the-shelf, garden variety, plain vanilla, screamingly obvious common sense?  (You know, the kind of stuff you don’t have to measure in a beaker to know, “Hey John!  This shit is real!“)

Anyhow, read the article, below.  Then ask yourself why the good people of Falmouth tolerate these self-important fools.

If WTS.com had an Alfred E. Neuman award, the Falmouth Board of Health would win it.

Falmouth Board of Health will request that health impacts from the town’s wind turbines be studied by the state Department of Public Health, and that a complaint log based on science be established online for residents to report adverse effects from the turbines.

In a meeting last night, the board heard a presentation from Ambleside Road resident J. Malcolm Donald on health effects from a 28-turbine wind farm in Mars Hill, Maine. The controlled study, conducted by Dr. Michael A. Nissenbaum, found that a large percentage of residents living within 1,100 meters of the turbines experienced symptoms, compared with residents who lived three miles away. According to Mr. Donald, the study found that 77 percent of abutters to the wind farm experienced feelings of anger, and over 50 percent felt feelings of stress, hopelessness, and depression. Over 80 percent reported sleep disturbances, compared with 4 percent in the control group, he said, and 41 percent of abutters experienced headaches.

The study, which was completed in March 2009, has yet to be published in a creditable journal—and, as several board members pointed out, has yet to stand up to the rigors of the scientiﬁc method, which include peer review and replication.

Board member John B. Waterbury, a biologist at the Woods Hole Oceanographic Institution, said he had carefully read the study and other documents sent by Mr. Donald over the weekend. “As a scientist, I look and see there isn’t much peer-reviewed literature. Then there are people who are clearly impacted by this thing in a number of ways,” he said. Fellow board member George R. Heufelder said he was not convinced that the physiological symptoms listed in the study are connected to the turbines. “I can’t dismiss your irritation and angst, but my analysis says, show me the facts. It takes someone to do a good, controlled study,” he said. Mr. Donald cited the “precautionary principle,” a legal term that allows policy makers to make decisions that are not based on scientiﬁc evidence. “You don’t really need to know why something is happening. If we know it’s happening, we need to take preventive mesures to stop it from happening,” he said. Board member Jared V. Goldstone pointed out that although the principle has been adopted in the European Union, it is not law in the United States. “The legal underpinnings of [Dr. Nissenbaum’s study] just aren’t there. Right now it’s a political issue,” he said.

Several residents of Blacksmith Shop Road, where the town-owned turbines are located, spoke about the health and quality-of-life impacts they started experiencing after the ﬁrst turbine was erected last spring.

John J. Ford, who said he lives 2,745 feet from the Notus Clean Energy turbine at Falmouth Technology Park and 3,740 feet from Wind 1 at the wastewater treatment facility, said he is currently trying to soundproof his bedroom in order to sleep at night. With an elevated heart rate and blood pressure, he said his experiences are similar to those in the Nissenbaum study. “My neighbors and myself would be enthralled, if the board of health took a more active role in this,” Mr. Ford said.

Colin P. Murphy, also of Blacksmith Shop Road, said that he has felt all the effects listed in the study “at some point or other.” He invited board members to spend time in the neighborhood for a full 24-hour period in various wind conditions to feel the effects for themselves. 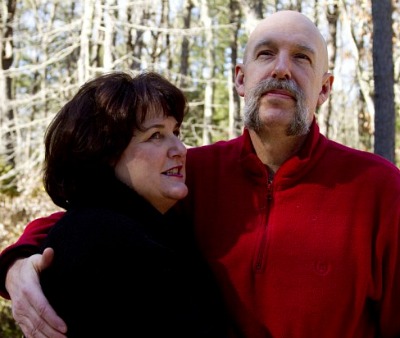 Mark and Annie Hart Cool, with appreciation to WGBH

Mark J. Cool, a resident of Fire Tower Road, asked the board to take a proactive approach by approaching state authorities for help and working with other town committees to address the residents grievances. “At the very least, acknowledge that something is going on in our neighborhood. It’s an enormous problem for everybody,” he said.

Chairman Gail A. Harkness said it was clear that residents are affected, but the turbines are related to the town’s ﬁnances, over which the board of health does not have jurisdiction. Mr. Murphy said that money should not be a concern for the board of health. “Aren’t I worth more than $178,000? I think I’m worth more than that,” he shouted, referring to the town’s estimate of how much money will be saved through wind energy each year.

Mr. Donald said that those savings should be enough to fund a study.

“Why can’t the board take some milk from those ‘cash cows’ to fund an epidemiological study?” he asked.

Dr. Harkness, an epidemiologist by training, suggested approaching the schools of public health at Harvard or Boston University to do a controlled study. “One residential study does not give you the truth. Repeated ﬁndings do not lead to a cause-effect scenario,” she said.

Mr. Cool asked board members whether they had seen the noise complaint log, which Falmouth Wastewater Superintendent Gerald C. Potamis explained is being kept by a private consultant. Dr. Goldstone said that could be helpful, especially if the log featured “controlled vocabulary” that could be used as scientiﬁc data for the sometimes subjective complaints.

Several residents said they had not heard of the log, and had been sending their complaints directly to selectmen or the town manager. Dr. Waterbury suggested posting the log, along with wind turbine data, on the town website so that it would be easily accessible.

Board members questioned whether pending litigation between a group of residents and the town would affect the online log, but they said they would explore the idea, along with the possibility of getting state health authorities to conduct a study in the affected neighborhoods.