Do marine wind turbines drive whales to beach themselves? Nobody knows for certain. (UK)

Editor’s comment:  The other day (March 15th), The Telegraph (UK) flashed the bulletin that “Wind farms blamed for stranding of whales.”  The article peaked my interest.

As is my habit, I began tracking it down—to its source.

After several minutes of digging, I discovered the article had not only been pulled from the Telegraph, it was conspicuously absent from the lead investigator’s website.  (The lead author being Professor Ian Boyd, at the University of St. Andrews—Scotland.)

Beginning to suspect something was amiss, I fired off an email to Professor Boyd, asking if he could send me a copy of the paper on “whales responding to wind turbine noise.”

Within minutes, I got this reply:

The press reports that you probably saw are wrong. One reporter jumped to a conclusion that was incorrect and it snow-balled out of control.

The paper itself (attached) says nothing about wind farms and I never talked to anybody from the Press about wind farms. This is a non-story manufactured by a part of the British Press.

Below, is the Abstract from Professor Boyd et al’s paper, “Beaked Whales Respond to Simulated and Actual Navy Sonar.”  Click here for the entire paper, published in an Open Access journal.

If you do a “search” through the paper, there is nothing about wind turbines therein.

The punchline?  All you readers who were, as I was, intrigued by the headline news about beaked whales being troubled by wind turbines at sea, had better withhold judgment on the matter.  They may indeed be affected by turbine infrasound and low frequency noise—but this paper does not demonstrate that.
· 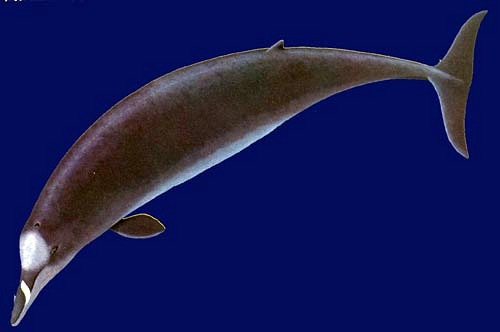 Beaked whales have mass stranded during some naval sonar exercises, but the cause is unknown. They are difficult to sight but can reliably be detected by listening for echolocation clicks produced during deep foraging dives.

Listening for these clicks, we documented Blainville’s beaked whales, Mesoplodon densirostris, in a naval underwater range where sonars are in regular use near Andros Island, Bahamas. An array of bottom-mounted hydrophones can detect beaked whales when they click anywhere within the range.

We used two complementary methods to investigate behavioral responses of beaked whales to sonar: an opportunistic approach that monitored whale responses to multi-day naval exercises involving tactical mid-frequency sonars, and an experimental approach using playbacks of simulated sonar and control sounds to whales tagged with a device that records sound, movement, and orientation.

Here we show that in both exposure conditions beaked whales stopped echolocating during deep foraging dives and moved away.

During actual sonar exercises, beaked whales were primarily detected near the periphery of the range, on average 16 km away from the sonar transmissions. Once the exercise stopped, beaked whales gradually filled in the center of the range over 2–3 days. A satellite tagged whale moved outside the range during an exercise, returning over 2–3 days post-exercise.

The experimental approach used tags to measure acoustic exposure and behavioral reactions of beaked whales to one controlled exposure each of simulated military sonar, killer whale calls, and band-limited noise. The beaked whales reacted to these three sound playbacks at sound pressure levels below 142 dB re 1 μPa by stopping echolocation followed by unusually long and slow ascents from their foraging dives.

The combined results indicate similar disruption of foraging behavior and avoidance by beaked whales in the two different contexts, at exposures well below those used by regulators to define disturbance.