“Once, I was screaming in agony–the tinnitus was so bad” (United Kingdom)

“Noise from windfarm is affecting my health”

A woman suffering from tinnitus, headaches and fatigue believes the Scout Moor windfarm is making her ill.

Nicola Brierley says she has pain in her ears and hasn’t had a good night’s sleep following the arrival of the controversial facility in September 2008.

She claims a low frequency droning noise, similar to the sound of a helicopter, is constantly pulsating into her home, approximately a mile-and-a-half away from the 26 giant turbines on the moors above Norden.

Not only can she hear the vibrating noise she also feels the disturbance in her body.

Nicola, who lives in Cutgate Road with her four-year-old daughter Katie, has undergone two brain scans and hearing tests after consulting her GP.

But they have all come back inconclusive.

She has now asked the council’s environmental health department to investigate.

Nicola, who was not involved with the campaign against England’s largest onshore windfarm, says she has been feeling unwell for more than a year.

She has lived in the same road for 38 years but says this is the first time she has suffered these health problems. 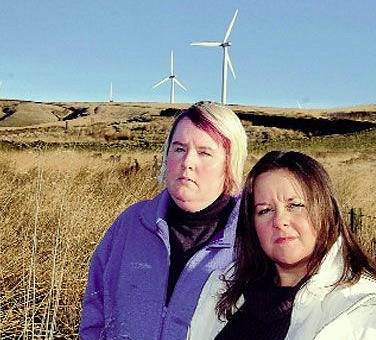 She said: “I have a feeling of fullness in my ears and I don’t feel refreshed from a night’s sleep any more.

“I have suffered blinding headaches and terrible fatigue.

“Once I was screaming in agony the tinnitus was so bad.”

A study by the UK Noise Association found that noise generated by wind turbines can cause significant health problems, including stress, anxiety and depression.

And it highlighted a possible link between low-frequency noise of the type transmitted by windfarms and a rare condition called vibroacoustic disease – a complex illness that can lead to epilepsy and cancer.

Report author John Stewart said: “This lady’s symptoms are all too typical of someone who lives in the vicinity of the wind turbines.

“It is essential that the environmental health department takes her complaint seriously.

“These are the exact symptoms that other people have complained of.”

He added: “We said in our report that the turbines shouldn’t be closer than a mile from people’s homes, but that should be flexible depending on the countryside.

“Sometimes this should be further away if there is nothing high between the homes and the turbines.”

Nicola’s neighbour Ann Kershaw also says she is suffering from headaches and earache and can hear the noise.

Coun Ann Metcalfe led the protests against the 325ft high turbines, which are said to power enough electricity for the needs of 40,000 homes in their 25 year lifespan. She said: “I would welcome a further investigation into this matter.

“This is one of the aspects we were worried about with the arrival of the windfarm, but we were seen as trouble makers.”

Peel Energy spokesman Jon England said: “We have not been contacted by Miss Brierley to discuss her hearing problems but we would certainly be happy to talk directly with her so we can understand any concerns that she has first hand.”

Rochdale council’s public protection manager Andy Glover said: “We are investigating Ms Brierley’s complaint and, at this stage, we feel it is very unlikely that the source of the noise is the wind farm.

“It is in a remote location some distance away from Ms Brierley’s home, and we’ve received no other complaints about it.”


Comments Off on “Once, I was screaming in agony–the tinnitus was so bad” (United Kingdom)