The killing fields of Ontario 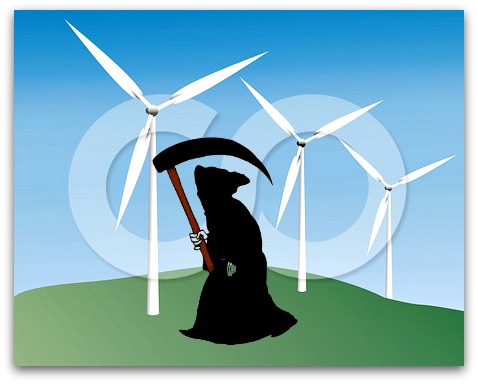 Image was not part of the original article—Editor

A major conservation group is calling on TransAlta Corp. to periodically turn off turbines at its Wolfe Island wind farm in Ontario to cut down on the number of birds and bats killed by the machines.

Nature Canada says the project’s 86 turbines are among the most destructive of wildlife in North America. The organization argues TransAlta should shut down parts of the wind farm – one of the biggest in the country – during high-risk periods in the late summer and early fall, when swallows congregate in the region and bats migrate. 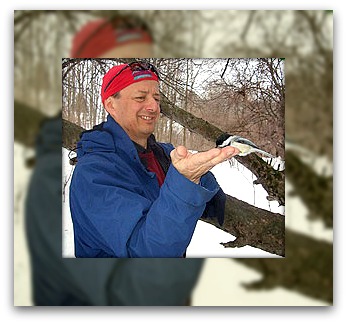 Ted Cheskey
Image was not part of original article

“That period is when the vast majority of birds seem to be killed,” said Ted Cheskey, manager of bird conservation programs at Nature Canada. “The evidence is there, and now there is an obligation for [TransAlta] to act.”

The controversy over bird deaths is just one of the many challenges facing Canada’s wind industry, which has run up against by increasingly vocal opponents who say turbines are ugly, cause health problems, and do not contribute to reduced carbon emissions.

The Wolfe Island site, near Kingston, Ont., began generating power in 2009, and an ongoing count of bird and bat deaths has been conducted by a consulting firm since then. Nature Canada says that while bird deaths have been in line with other wind farms on the continent, those numbers are far too high.

The bird death rates from the turbines “are consistently high,” Mr. Cheskey said. He is particularly concerned with the deaths of tree swallows and purple martins – which are in decline in the province – along with bat fatalities. 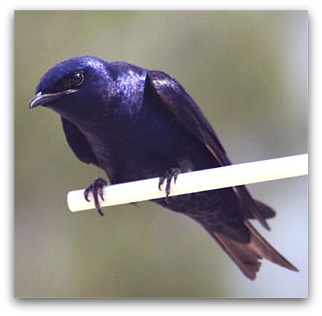 Purple Martin
Image was not part of original article

Mr. Cheskey said his comparison of the numbers in the Wolfe Island report shows the turbines generate one of the highest rates of casualties – about 1,500 birds and 3,800 bats in a year – of any wind farm.

But TransAlta disagrees with Nature Canada’s views. The numbers suggest that the Wolfe Island wind farm is no worse that most others, and is well within limits set by federal environmental regulators, said Glen Whelan, TransAlta’s manager of public affairs.

“The mortality rates that we are seeing in birds and bats are within ranges reported for other wind farms across North America,” he said. For bats, the death rate is well below what is often reported in the eastern United States, he added.

While “bird and bat mortality is unfortunately inevitable at wind power facilities, we are seeing numbers that are within the ranges that are called for by regulators,” Mr. Whelan said.

TransAlta is researching ways to mitigate bat deaths, possibly by turning off turbines at certain times, but the results are not in yet, he said.

Nature Canada is not opposed to wind farms in principle, but it thinks they should be in locations where birds and bats are not at serious risk. Because of its location on a migratory route at the eastern end of Lake Ontario, Wolfe Island is one of many spots where the risk of killing migrating birds and bats is particularly high, Mr. Cheskey said. 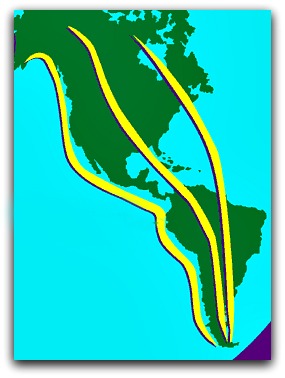 Image was not part of the original article

Other groups base their opposition to wind farms on other factors. Wind Concerns Ontario, one of the most vocal of the anti-wind groups, claims that noise and vibration from turbines causes sleep deprivation, headaches and high blood pressure. It is demanding independent studies of health impacts.

Anti-wind groups were outraged by a decision two weeks ago from Ontario’s Environmental Review Tribunal which ruled that a wind farm near Chatham, Ont., being developed by Suncor Energy Inc. can go ahead because opponents – who made detailed presentations at a lengthy hearing – did not prove that it would cause serious harm to human health.

Some groups also worry about the aesthetic issues that arise from the erection of thousands of new turbines across the country, while others suggest wind power is expensive, unreliable and needs fossil-fuel-generated back-up


Comments Off on The killing fields of Ontario