At least a good many Danes now say this, according to Danish sources not affiliated with the wind industry.  Which is a revelation to those of us in North America and Australia who are constantly reassured by wind turbine salesmen that, “Danes have lived with turbines pin-cushioning their country for years, and they love ’em!”

Bullshit!  Read the following articles.  They are clumsy translations from Danish into English—translated by Google Translate, a fine tool yet far from perfect.  Imperfect, but damn good.  Good enough to understand the point of the article.

The articles are from the website of The (Danish) National Association of Infrasound.  Wow!  I spent hours surfing the site, with Google Translate as my guide.  Impressive!

Turns out Danes are pissed off about infrasound-caused illness, not just from wind turbines but all sorts of industrial and commercial sources!  That’s what the site is all about.  Reading the articles, you realize Wind Turbine Syndrome is endemic in Denmark, though not necessarily triggered by wind turbines; numerous forms of machinery cause the same illness.  (There should be nothing surprising in this, of course—except, somehow, it’s a surprise.)

Although Danes are aware of ILFN Disease—Infrasound/Low Frequency Noise Disease—and mad as hell about it, they don’t seem to know much about the mechanisms whereby infrasound creates disease.  That is, they don’t know much about the pathophysiology of infrasound.  This is where Pierpont’s book comes in.  Pierpont explains at least one mechanism for ILFN Disease:  via the vestibular system of the inner ear.  Dr. Alec Salt at the Washington University School of Medicine has demonstrated a role for the cochlea, as well.

In any case, begin with this article, “Holy Cow Rotary!” 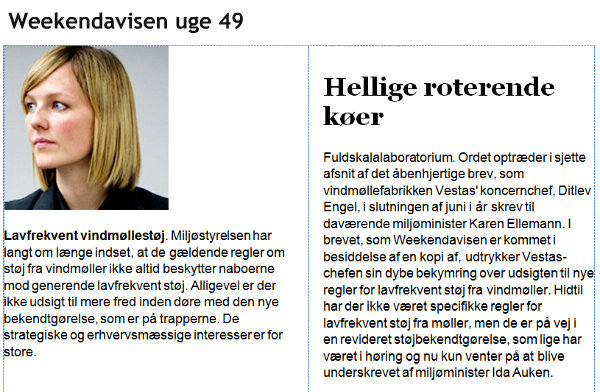 The text beneath the photo translates as follows:  “A low wind noise.  The Environmental Protection Agency has finally realized that the rules on noise from wind turbines don’t always protect the neighbors from annoying low frequency noise.  Yet there is no prospect of a quieter indoors with the new law, which is imminent.  [The sad fact is] the strategic and commercial interests are too large.”  An oblique reference to Vestas, Denmark’s giant wind turbine manufacturer of, now, giant wind turbines.

The text immediately to the right begins with “Hellige roterende køer.”  Google tells me this translates as “Holy Cow Rotary!”  (Hmm.  Even if Google’s slightly off, it’s appropriate, no?)

You can access the article by opening the Nat. Assoc. of Infrasound site and scrolling down till you get to the article circled in black, below.

Here it is in English translation, starting midway through the article.  (Remember, it’s a crappy translation, but you get the gist of what’s going on.)

From house and home

One of the people on your own body really felt what it’s like to live in the middle of it, Ditlev Engel calls a “full-scale laboratory” is Joan Rafn.  She is shocked by the Vestas CEO’s vocabulary. But on the other hand, he’s very accurate, she says.

“It corresponds to what we are experiencing. We will be seen as nothing more than guinea pigs,” she says.

For over half a year she was with her husband and daughter next door to eight of the 3 MW Vestas turbines Ditlev Engel mentions in his letter.  Turbines began to spin in mid-December 2010 in a cluster in a field outside the village Ådum by Tarm in West Jutland.  The nearest is only 553 meters from Joan Rafn’s room.  First August 2011 she gave up and the rest of the family to stay, and they moved away from the area, resignedly an empty, unsold house, as they are now starting to empty, trailerlæs after trailerlæs.

“It is no exaggeration to say that we have been chased from our homes by the windmills.  But eventually we had no other choice.  Even the worst flu cannot describe it, as my daughter and I experienced,” says Joan Rafn to Weekendavisen.

She cited tightness in the ears, “as if eardrums stood and waved constantly,” and general discomfort, which among other things made it impossible to sleep at night.  For several months her daughter had come out of her room to sleep on an old sofa in baggangen [the basement, maybe?] where the low frequency, humming noise seemed less troublesome.

Joan Rafn was deeply affected, as she tells it. She and her husband Michael had expected to remain in the family house until they were old.  Now they only go back to the house to fetch a load of moving goods more, or to open their home to all interested people who want to know what it is like to live adjacent to large wind turbines—an offer over 300 people, so far, have taken advantage of.

According to the Environmental Report, prepared for the Ringkøbing-Skjern prior to approval of the wind turbine cluster near Joan Rafn’s house, all the “noise” regulations are being kept to the letter.

Everything is therefore in perfect order—on paper.  Nevertheless, experience shows that the applicable noise regulations often make it difficult and sometimes downright impossible to live as a neighbor to the new, large wind turbines, as compared with their more humble predecessors.  [The newer models] are veritable rotating stations with enormous strategic and commercial importance.  But as the big wind turbines have been built in the most windy parts of the country, protests have risen over the genes [? impacts?] of living close to turbines.  One of the focal points of complaint is very low frequency noise, which recent research has shown greater and more widespread in large windmills, but notice the noise from wind turbines from 2006 did not take into account.  If the general noise limits are met, then the low frequency noise will never be a problem.  Such was the Environmental Protection Agency’s dogma that was tailor-made for the wind sector’s needs and the political agenda.

Here’s another article, translated from a posting further down the list shown above.

Joan Rafn and family gives up the unequal struggle against Bindesbøll turbines at Tarm. 1/8 vacate their house, located just 600 meters from the turbines.

The house from then on will be empty and deserted, as one of the rare “ghost” houses in Denmark.  It would be a shame support at kæmpevindmøllernes altar in the sacred name of the environment.

The family has long lived in the house only on weekdays and weekends spent elsewhere to get some rest and recover.

Every day in the house is dominated by noise around the clock.  The family have not slept much.  Joan Rafn says, “We wonder how a lydfirma that Delta knows what we get sick of.”

The sight will be daytime constantly bombarded with rotating blades.  Reflections [shadow flicker] in windows and glass.  Joan Rafn: “We can not get away from the spinning mills.”

Skyggekastene spring and autumn are pure torture for the family. “This year we had a day with a half hour’s shadow in the house, and they come in from three sides,” said Joan Rafn.

Until now it has been 12 visits to the doctor, hospital and ear specialist.

But 1/8 is the end. So the family will vacate the house, leaving it deserted and empty as a symbol of a rash and inhuman Danish wind turbine policy.  For helbredets sake.

Surely most would agree that it’s terrible that it should come so far?  When will politicians and civil servants awaken out of their wind trance and regain common sense?

And when will the Board of Health realize that its job is not to protect wind turbine industry earnings, but public health?  And get started on in-depth medical examinations of the many families who, as with Joan Rafn and her family, live in the shadow of giant wind turbines.

Until then . . . wind turbines must not be placed closer than 2 km to residences, as international medical science recommends.

And here’s a third, from further down the list.  This one is a little tougher to decipher.

“Of course, neighbors of giant wind turbines to be compensated”

The wind industry is sorry again and again that they are now paying compensation to neighbors for the next giant turbines. It’s poison for the mills, they say.  In line with this Auken fired a broadside of the Berlingske Tidende 26/7 at energy bill, and that was probably what you might expect.  Svend Auken, especially harcelerer of damages to neighbors to giant wind turbines were as no surprise. It was not a novelty—but perhaps a little tiring – re-read how skilled Auken even thinks he was as environment minister.

But the wind energy industry is exactly as it has been groomed.  Many politicians have flatly denied that there is a difference between 50 meters and 150 meters or more for wind turbines.

Wind players have rejected the need for strengthening the already too lenient noise and separation distances for wind turbines.

One is denying that there are noise problems with the giant turbines.  Measurements recently made by Delta Acoustics have shown that large turbines emit more low frequency noise than smaller turbines, but this problem is sweeping wind industry off with a remark that the triviality can easily be done along the way.  But precisely on this question there is doubt, and it is worrying that you do not have time to wait to take a final decision on the location of the new mega turbines until the ongoing investigation is completed.

Pressed by Wind Industry Association, the Minister for the Environment and the EPA again expressed that there are problems with low frequency noise from large wind turbines, if the other noise requirements are met. Municipalities can safely go ahead with wind power rankings.

Many neighbors next to giant wind turbines seem to include politicians in Thisted did the right thing when they exposed the decision to travel huge mills until the ongoing noise study was completed, and you certainly are aware of how much low-frequency noise that these turbines will emit and not least for what the noise will mean for local residents.

Wind players close their eyes to the giant turbines in the interest of aviation must lysafmærkes of sometimes extremely annoying light.  Some places to which even included light poles that are as high as turbines, and it fails to relate to what the wings enormous shadow will mean for local residents.

The industry’s constant rejection of the problems and its reluctance to listen to the wind turbine neighbors has led to the payment of compensation (emphasis added).

We do not think it will help troubled wind turbine neighbors to receive several thousand dollars, but we hope that claim will have windmill owners to think about it one more time before they make this mill monsters up.

Out to sea with them!

The basis of the current rules for wind turbines stood Auken sometime in his time even godfather, and the code is enough, claiming wind players. [I.e., the wind industry claims the current noise regulations are satisfactory.]  But they are not! [This is clear from] the many protests from the neighbors [living] next to giant turbines.

And remember: These people are not against wind energy.  Most of them live now close to the mills with the problems it brings.  But you do not want to be the neighbor of monster turbines.  Large mills are going out to sea.

The next time a wind developer tells you Danes are happy as clams with wind turbines, you fire back, “Horseshit!”  Which, it turns out, is Danish for “horseshit!”

If you want to sound more urbane, you can of course retort, “Hellige roterende køer!”  “Holy cow rotary!”  But then you will need to translate it.

Stick with “horseshit”; it’s the same in English and Danish.