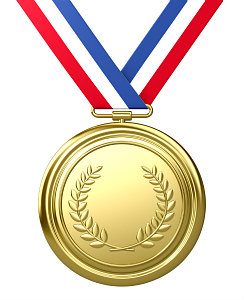 Infrasound from Wind Turbines Is Indisputable, and Moreover It Makes People Ill

I am a professional consultant engineer, and my company is based in the United Kingdom,” begins Dr. Malcolm A. Swinbanks in his testimony to the Michigan Public Service Commission, “but fourteen years ago I was asked to come to the US to lead an advanced research project for the Office of Naval Research. My American wife & I now live in Port Hope, Michigan. During the course of my career, I became a consultant to many different companies and research organizations on a wide variety of problems related to unsteady dynamics, noise, vibration, shock and acoustics.

“I have worked personally with both Professor J.E. Ffowcs-Williams, and Dr. H.G. Leventhall, two of the foremost UK acousticians. Twenty to 30 years ago, I worked directly in collaboration with both on several low-frequency noise installations, thus gaining first-hand experience of the problems associated with low-frequency noise and infrasound. My actual time-on-site addressing low-frequency noise probably well exceeds either”—Malcolm A. Swinbanks, PhD.  (Click here for Dr. Swinbanks’s full report to the Michigan PSC.  It is very revealing of the true nature of wind turbine infrasound.)

In his 2006 Canadian paper relating to infrasound and wind turbines, Leventhall criticised Dr Nina Pierpont for having referred to the impulsive noise from wind-turbines as “infrasound,” arguing that the relevant paper that she had quoted by G.P. van den Berg did not relate to infrasound at all, but only to dBA levels.

In 2003 & 2004, G.P. van den Berg actually published two separate papers, both relating to the specific windfarm in Holland that he (van den Berg) had assessed. The first paper did indeed only relate to dBA levels, but the second paper referred explicitly to low-frequency and infrasound, and described how the turbine blade passing in front of the tower could generate extremely low frequency impulses. Van den Berg did not consider that this infrasound was audible, but there is no doubt that he fully acknowledged its presence.

This second paper was presented at the conference on Low Frequency Noise in Maastricht in August/September 2004. Dr H.G. Leventhall was one of the conference organisers, and subsequently edited the proceedings. 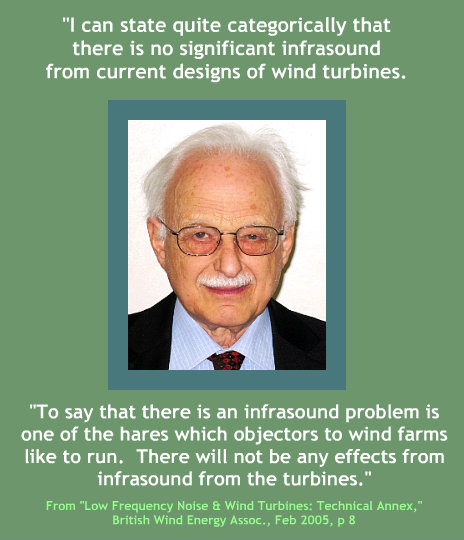 In 1989, NASA identified & reported that a windfarm in Hawaii, with modern-style upwind rotors, was generating impulsive infrasound & low frequency sound which they attributed to the effects of the rotor passing through wind-gradients and shadowing. They analysed the sound characteristics, and then simulated numerically how different wind-gradients could give rise to such effects.

I have myself analysed data from a windfarm in Michigan, which was generating unambiguous impulsive infrasound (emphasis added).  It was possible to identify separate impulsive contributions from six different turbines at distances of 1500 feet to 1.2 miles.

The maximum power spectral levels for the discrete frequencies associated with the harmonics of the impulses was 64dB SPL (Sound Pressure Level). But the overall rms (root mean square) sound power level was 77dB SPL, and the peak of the time waveforms of the impulses was 88-90dB.

This indicates one of the major errors that has consistently been made in assessing infrasound from wind-turbines. Examining rms power spectrum peaks shows only 64dB, while comparing time domain impulsive peak levels shows 88-90dB. This represents ~25dB difference in the assessment of the infrasonic intensity.

I explicitly pointed out this feature at the Stratford Conference on Low-Frequency Noise in May 2012, and at the Internoise Conference in New York in August 2012.

I would comment that I first became aware of the physical effects of infrasound when working extensively on site with an industrial gas turbine in 1980. I identified specific aspects which were closely related to some symptoms of sea-sickness with which I was very familiar, being a keen offshore sailor.

Thus I did not doubt that infrasound under some circumstances can cause adverse effects, and the relationship to sea-sickness implied that there was probably some interaction with the balance mechanisms of the inner ear.

So the more recent work of Dr Nina Pierpont did not strike me as heresy—rather, it endorsed an opinion that I had formed from my own direct, first-hand experience in an entirely different context, almost 30 years earlier. 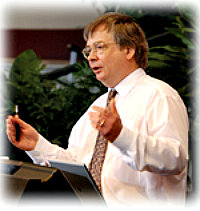