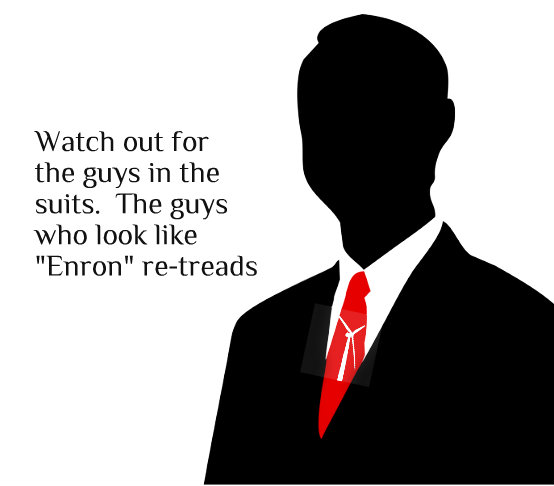 ‘The wind-farm business is bloody well near a pedophile ring. They’re fucking our families and knowingly doing so.’

Waterloo felt like a ghost town: shuttered houses and a dust-blown aura of sinister unease, as in a horror movie when something dreadful has happened to a previously ordinary, happy settlement and at first you’re not sure what. Then you look up on to the horizon and see them, turning slowly in the breeze . . .”

One of the great popular misconceptions about climate-change sceptics such as Ian Plimer, Bob Carter, Cardinal George Pell and me is that we’re all Big-Oil-funded, Gaia-ravaging, nature-hating emissaries of Satan. We can’t look at a lovely pristine beach, apparently, without praying for a nice, juicy oil slick to turn up and wipe out all the pelicans and turtles and sea otters.

But this isn’t actually true. I love our beautiful planet at least as much as your $180,000-a-year (for a three-day week) climate commissioner Tim Flannery does. One of my great heroes is Patrick Moore, the Canadian co-founder of Greenpeace with whose sensible, rational approach to environmental issues I agree 100 per cent. Another of my heroes, after an article headlined “Where eagles dare not fly” in The Weekend Australian on April 21, is this newspaper’s environment editor Graham Lloyd.

It took great courage for Lloyd to write up his expose of the tremendous damage being caused by a wind farm to a small community in Waterloo, north of Adelaide. Most newspaper environment editors — from Australia to Britain and the US — tend, unfortunately, to be so ideologically wedded to the supposed virtues of renewable energy they find it all but impossible to criticise it.

Lloyd interviewed a number of victims whose lives had been ruined by the vast, swooshing wind towers looking over their homes. They found sleep almost impossible; they couldn’t concentrate; they had night sweats, headaches, palpitations, heart trouble. Their chickens were laying eggs without yolks; their ewes were giving birth to deformed lambs; their once-active dogs spent their days staring blankly at the wall. The damage, it seems, is caused not so much by the noise you can hear but by what you can’t hear: the infrasonic waves that attack the balance mechanism in the ear and against which not even home insulation can defend you. Its effects can be felt more than 10km away.

Inspired by Lloyd’s article, I went to investigate and was heartbroken by what I found. Until you’ve seen what it can do to people, it’s easy to dismiss wind turbine syndrome as a hypochondriac’s charter or an urban myth. But it’s real all right. Waterloo felt like a ghost town: shuttered houses and a dust-blown aura of sinister unease, as in a horror movie when something dreadful has happened to a previously ordinary, happy settlement and at first you’re not sure what. Then you look up on to the horizon and see them, turning slowly in the breeze . . .

Even more shocking than this, though, were my discoveries about the finance arrangements and behaviour of the wind farm companies. What we have here, I believe, is the biggest and most outrageous public affairs scandal of the 21st century — one in which the Gillard government is implicated and that far exceeds in seriousness and scope of the Slipper or Thomson sideshows.

At the heart of this scandal are the union superannuation funds that are using the wind farm scam as a kind of government-endorsed Ponzi scheme to fill their coffers at public expense. One of the biggest wind farm developers — Pacific Hydro — is owned by the union superfund Members Equity Bank. To meet its carbon reduction quotas, we’re told, Australia needs to build about 10,000 new wind turbines like the ones that have destroyed Waterloo (and dozens of communities like it from NSW to South Australia).

The figures are mind-boggling. Each of those turbines will cost about $3 million, which means $30 billion even before you’ve started building the power lines. And where’s this money coming from? The consumer, of course — mostly via tariffs whacked on to the price of conventional, fossil-fuel energy prices, in the form of payouts called Renewable Energy Certificates.

Note that wind turbines produce very little power. Because wind is intermittent, they operate at between one-fifth and one-third of their capacity, meaning they are erratic, unreliable and have to be fully backed up by conventional “black” (mostly coal-fuelled) power. Where the money is to be made is through the REC subsidy. A 3MW wind turbine that generates (at most) $150,000 worth of electricity a year is eligible for guaranteed subsidies of $500,000 a year. A ridgeline hosting 20 or 30 turbines generates very little power — but an awful lot of free cash for those lucky enough to get their snouts in the trough.

If the unions were merely exploiting government environmental legislation to milk the taxpayer it would be bad enough: but what makes the wind farm scam so scandalous are the public health issues. Why aren’t we more aware of these? Because there have been cover-ups on an epic scale. The owners on whose land the turbines are built are subject to rigorous gagging orders (from law firms such as Julia Gillard’s ex-company, Slater & Gordon); tame experts are paid huge sums to testify that there are no health implications; inquiries are rigged; victims are rehoused and silenced with million-dollar payoffs. The global wind farm industry — a cash cow for everyone from Labor’s unions to the mafia — is so massive it can afford it.

Meanwhile the rest of us lose. Communities are divided, landscapes blighted, birds and bats sliced and diced, property values destroyed, lives ruined to deal with a “problem” — anthropogenic CO2 causing “global warming” — which most current evidence tells us doesn’t even exist.

As a New South Wales sheep farmer fighting tooth and nail to stop a wind farm development near his beloved home told me the other day in trenchant style: “The wind-farm business is bloody well near a pedophile ring. They’re f . . king our families and knowingly doing so.”

.
James Delingpole’s Killing the Earth to Save It (How Environmentalists are Ruining the Planet, Destroying the Economy and Stealing Your Jobs) is out now (Connor Court Publishing).