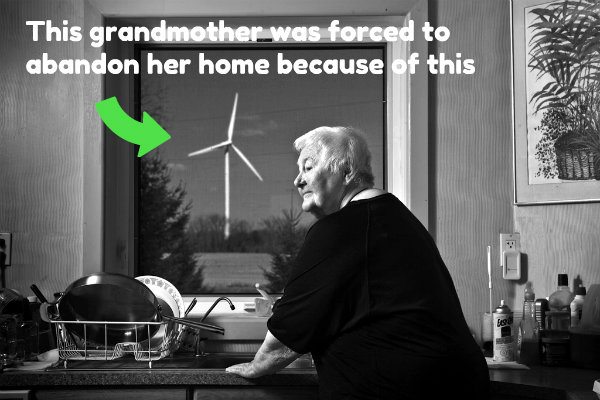 Stephana Johnston, an eighty-one-year-old former schoolteacher, with a wind turbine visible through her kitchen window, 526 metres from her property in Clear Creek, Ontario. There are eighteen turbines within a 3-kilometre radius of her home. Within days of the turbines going into operation, Stephana says that she began to experience physical symptoms that she hadn’t had before:  ringing in the ears, anxiety, a feeling of pressure in her head, and sleep deprivation due to the turbine vibrations.

She now sleeps in a trailer 16 kilometres from her house, where she says those symptoms dissipate.

Stephana was a Green Party candidate in the 2008 federal election and is active in campaigning against proposed wind turbines in areas near homes.

Editor’s note:  Stephana wrote the following as a comment upon this article, “Clean wind is clean only until it enters the blades. After that it is dirty wind.”

For the last four years, I have been attending Emergency Rooms, where the E.R. physicians don’t know what to do. A family physician has tried to eliminate every cause (Like testing for syphilis! Negative), testing for sleep apnea (negative), West Nile virus (negative), Lyme disease (negative), but has no treatment to offer.

It’s really an uphill battle to educate medical professionals who believe they know more than their patients do about themselves.  (Stephana holds a B.A. degree from the University of Toronto in Anatomy—Ed.)

My son has been working on a solution this last winter and spring. He outfitted his trailer, which is 15 km away from IWTs, with hydro (What a shock as to the cost!), built safety features into the entrance and put in a back-up generator. Once the night-time temperatures are 5 degrees C, I will make the change to “roughing it in the bush” until the night time temperatures drop below 5 degrees C again.

While living this simple life, I’ll have to investigate another living arrangement well away from the IWTs.

Reading Thoreau should be a great help.

All suggestions from readers will be most welcome as well.

All the best to every Wind Warrior.