Editor’s note:  The following clinical review article, sent to us by Dr. Mauri Johansson, MD, MPH, is from the Swedish medical journal, Läkartidningen.  Unfortunately for us, it is available only in Swedish.  Fortunately for us, “Google” offers a reasonable translation service.  Behold the result!  If readers spot mistakes in translation, please contact me and I’ll correct them.

Notice that the lead author, Dr. Enbom, is not only an MD, PhD, but—this is crucial!—he’s a neuro-otologist.  A neuro-otologist is a combination “neurologist + otolaryngologist.”  In plain English, this means that Dr. Enbom’s research and clinical expertise focus on disorders of the inner ear (along with the nose & throat).  Wind Turbine Syndrome (WTS) is chiefly a disease of the inner ear, it increasingly appears.  The good news is, this physician/scientist (that’s what the PhD is about) has the exact clinical and research credentials to pass judgment on WTS.  (This separates him from amateurs like Geoff Leventhall, a Brit with a physics PhD, and the Australian “wonder,” Simon Chapman, armed with a sociology PhD.  Both men see fit to scoff at WTS, despite neither one having the slightest expertise or remotest credential to do so.  To call this ludicrous is to grossly understate the matter.)

Click here for a PDF of the original (Swedish). 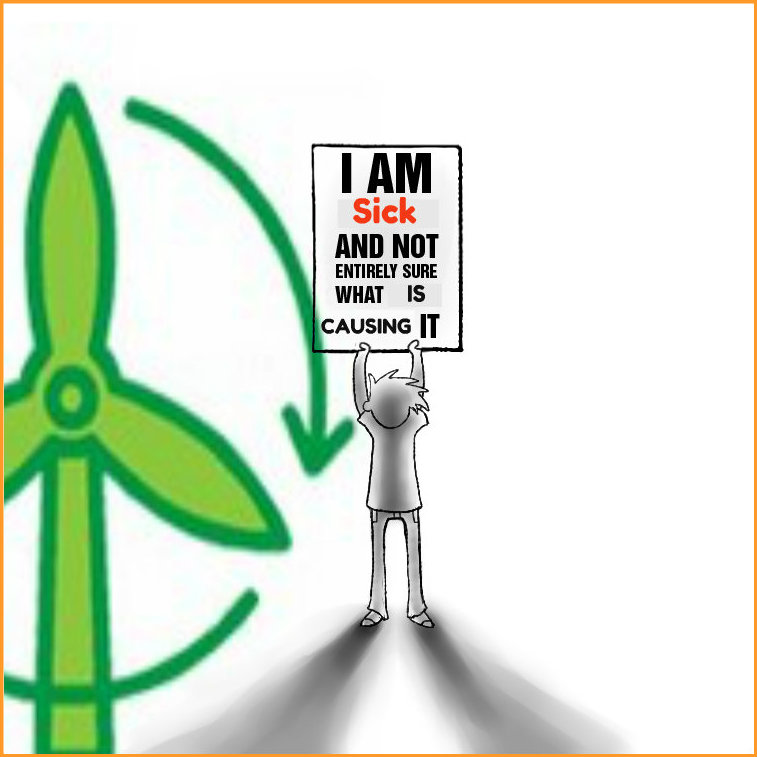 Infrasound from wind turbines affects the inner ear and is a potential health risk for people with migraine or other type of central sensitization. The authors maintain that the legal framework for the creation of new wind turbines should be revised, taking into account this fact.

.
Previous scientific studies on wind turbines and infrasound have been contradictory. They have therefore not been sufficiently credible when planning a framework for the establishment of wind turbines. In recent years, however, a new insight has emerged on the central sensitization, providing a better understanding of migraine, fibromyalgia and other chronic pain syndromes [1, 2] and some cases of tinnitus and dizziness. This understanding is also important for understanding how infrasound from wind turbines can affect health. Several studies have found that living near wind turbines often create severe sleep disturbance and depression. They have also found an increased incidence of dizziness, tinnitus, hyperacusis, headache, increased activation of the autonomic nervous system, etc. [3, 4].

In addition to the audible sound, which can provide noise damage and be generally disruptive, mentally, spinning wind turbines also produce a vibrant infrasound that affects the inner ear and the central nervous system without damaging the hearing.

Infrasound is sound with frequencies below 20 Hz, corresponding to wavelengths of 17 meters and above, that is not perceived with normal hearing. This sound, if it is not mitigated substantially, propagates over very long distances. It arises from several sources, such as pulsating flows from chimneys, large eddies (such as wind turbines and large jet engines) and large vibrating surfaces. In scientific studies, infrasound from wind turbines has been measured at levels so low that the sound is not perceived by humans. It has also been determined that infrasound from wind turbines does not give rise to noise damage in the traditional sense [5].

In general, what has not been taken into account in many of these studies, is that infrasound from wind turbines has a rhythmic pulsing sound, and the pulsating sound pressure affects the inner ear, although no sound is perceived by the individual. The pressure waves propagate into the inner ear fluid-filled cavities, and this “massage effect” affects the sensory cells in the inner ear hearing and organs of balance [6]. Many studies fail to take into account the fact that some people are more sensitive than others to the sensory impact. Some are significantly affected by the pulsating sound pressure while others are not affected by it in a significant way.

Migraine is caused by a genetic central sensory hypersensitivity causing risk for central nervous sensitization. Migraine prevalence is about 30 percent in the general population [10, 11]. In addition there are other causes of central sensitization, which means that more than 30 percent of residents in the vicinity of wind turbines could be, to greater or lesser extent, affected by wind-related “annoyance.” Risk groups include people with migraine disorder or a family history of migraines, people over 50 years of age, people with fibromyalgia and those with a tendency to anxiety and depression [12].  Children and adults with ADHD and autism are at risk and could have their symptoms worsened.

The issue is not noise damage in the traditional sense, but the effect of a constant pulsating sound pressure that constantly changes the pressure in the inner ear and excites sensory organs there. One can liken it to pulsating or flickering lights—many people are not bothered noticeably, while people with sensory hypersensitivity may experience discomfort. Flickering light can even trigger epilepsy. Likewise,constantly pulsating, non-audible infrasound from wind turbines triggers considerable problems in people with central sensory hypersensitivity. These problems can become chronic, debilitating and lead to anxiety and depression and increase the risk of heart attack.

The current regulatory framework for wind turbines has not taken into account the potential risk to people with central sensory hypersensitivity. Wind turbines are being erected too close to buildings [homes]. The current regulatory framework should be revised with an increased safety distance from buildings [homes] to prevent or reduce the risk of wind-related excess morbidity.

(Potential ties or conflicts of interest: None declared.)