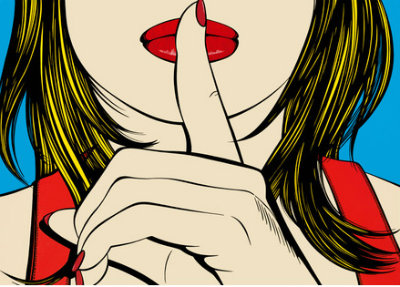 Editor’s note:  This past autumn, 2 physicians and a statistician published a significant article in the journal Noise & Health on the “Effects of industrial wind turbine noise on sleep and health.”  This website didn’t feature the article, worthy as it is, until we could twist Dr. Pierpont’s arm to review it—peer review it, if you like.  She has now done so, below. 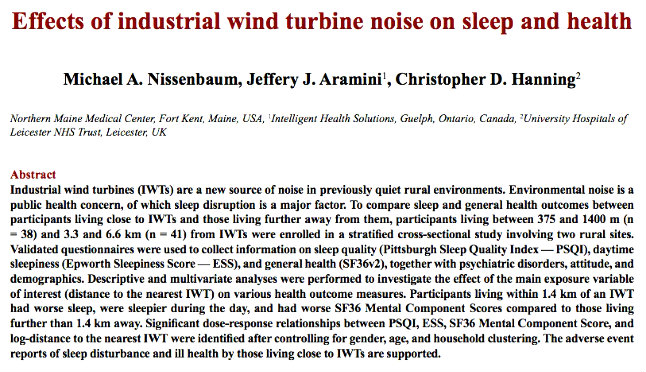 This is a good paper.  Its strengths are:

» Study and control populations (near and more distant from turbines, respectively) were selected by a random sampling method and assessed identically using the same questionnaires.

» The questionnaires are published and have been used and statistically refined in other populations for other kinds of problems.

» The data was analyzed in a complex multivariate fashion by a statistician.

» Significant relationships were found even though the sample size was small.

It appears to me that the investigators limited the scope of their inquiry to maintain the above conditions with the goal of keeping the study focused, easily explained, and publishable (a strength).  In the process, however, they disregarded salient aspects of the wind turbine noise problem which are harder to explain and more controversial (a weakness of this study from my point of view).

Specific comments are as follows:

» The focus on sleep quality and use of general questionnaires about well-being exclude the unique and striking health effects from wind turbines, which are at present borne out by the recent Shirley, Wisconsin (2012) noise study.  These effects include nausea, headache, and cloudy thinking independent of sleep disturbance (see Pierpont 2009, Ambrose and Rand 2011, Rand et al 2011, Shirley Wind report 2012).

» Physical well-being was assessed but results were not presented.  Negative or non-significant results can also tell us something about a phenomenon and should perhaps be included.

» The statistical modeling process used for drawing the regression (relationship) curves on the graphs is not clear.  In what way, for example, were age, gender, and site incorporated into the regression (as noted in the descriptive legends of Figures 1-3)?  How much of the variation in survey scores did these variables account for?

» However, there are simpler results presented numerically in Table 3, showing near vs. far comparisons for the various measures used, with their degree of significance.   We find there, for example, that the average Pittsburgh Sleep Quality Index is significantly higher (meaning worse sleep) close to turbines, with a significance level of 0.046 for near vs. far.  The percentage of high results is not significantly different.  The result for the Epworth Sleepiness Scale is similar, with the near vs. far difference in average value being significant at 0.032.  The near vs. far difference in the average Mental Health well-being score is significant at 0.002, meaning it is 15 to 20 times more likely to be a real, non-random difference than the sleep measures.  Significance levels for the calculated regression equations (relating scores to distance as a continuous variable and incorporating some other variables) are similar, as shown in the descriptive legends for Figures 1-3.

» You can see this difference if you compare Figure 3 to Figures 1 and 2, looking at the patterns of scatter of the data points close to turbines compared to far away.  The fact that you can see a clear difference between near and far in the mental health results, but not for sleep results, is reflected in the degree of significance of the results.  The difference is due to the dense cluster of low points (poor mental health) for locations close to turbines, compared to only scattered, isolated low points for the locations far from turbines.

» The discussion of mechanism is measured and seeks to comfortably embed wind turbine effects with other types of noise disturbance.  In fact, there are qualitative differences due to the dominance of inaudible, low-frequency or infrasonic components over the audible components in wind turbine noise (see Shirley Wind report 2012).

» These authors, like others who study wind turbine noise effects, asked their subjects before-and-after questions about their subjective experiences and preferences.  These authors present these data in Table 3, showing significant near vs. far differences in responses to questions about changes when the turbines began operation, differences sleeping at home vs. away from home and turbines, and desire to move away.   These kinds of subjective explorations are typical in studies of wind turbine noise, the results often discussed informally in an introduction or discussion.  Face-to-face with affected people, researchers tend to step down from their posture as people who only measure objectively, ask natural before-and-after questions, find their own reasons for believing people, and present the information so gained as critical for their understanding of wind turbine noise effects (e.g., Ambrose and Rand 2011, Rand et al 2011, Shirley Wind report 2012).  Only my study (Pierpont 2009) documented before-and-after effects systematically in a natural experiment case-crossover format, basing the entire analysis on the premise that believing what the subjects have to say about their experiences of wind turbine noise is both reliable and the most efficient means to develop understanding of these significant new noise-related phenomena.  Though the scientific posture doesn’t recognize this kind of approach, every researcher does it anyway, because it is real and valid.  Even Eja Pedersen did this, though she confined the results of her in-depth interviews (in which she discovered people driven from their homes) to her thesis (2007), never publishing them in a journal.

» New research proposals in this field are wisely suggesting case-crossover formats.  The 2012 Shirley Wind  report, for example, recommends a short-term, prospective, experimental case-crossover exposure format using previously affected people, asking them to quantify their immediate sensory responses to wind turbines being on or off without other knowledge of the state of the turbines.  This approach could clarify experimentally the sensory, low-frequency-noise-associated phenomena that disturb physical sensation and mental processes apart from sleep, contribute to sleep disturbance, and differ among exposed people.

A Cooperative Measurement Survey and Analysis of Low Frequency and Infrasound at the Shirley Wind Farm in Brown County, Wisconsin.  Submitted in expurgated form to the Wisconsin Public Service Commission on December 27, 2012 and in complete form on December 28, 2012; both forms are available with commentary here.