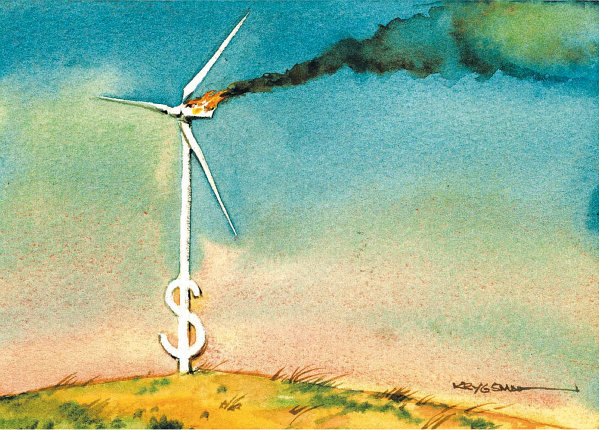 .
“Hostages to a Renewable Ruse”

If there is a sound more pitiable than the whine of a pious environmental activist, it is the wail of a financier about to do his dough.

The mournful chorus now wafting from Greg Hunt’s waiting room is the sound of the two in unison, pleading with the Environment Minister to save the life of their misshapen bastard child, the renewable energy target.

You have to hand it to Hunt, who either has nerves of steel or is stone deaf, for he has retained both his cool and his fortitude.

The RET review by Dick Warburton on the government’s behalf has brought the rent-seekers out in force, for billions of dollars of corporate welfare is resting on its outcome.

As it stands, the RET will produce a bounteous return for a small group of investors shrewd enough to get into the windmill game while the rest of us are slapped with four-figure power bills.

Wind farms may be ugly but they are certainly not cheap, nor is the electricity that trickles from them. No one in their right minds would buy one if they had to sell power for $30 to $40 a megawatt hour, the going rate for conventional producers.

But since the retailers are forced to buy a proportion of renewable power, the windmill mafia can charge two to three times that price, a practice that in any other market would be known as price gouging.

As if a $60 premium were not reward enough, the transaction is further sweetened with a renewable energy certificate that they can sell to energy producers who insist on generating power in a more disreputable manner.

The going rate of $40 a megawatt hour means the total income per megawatt for wind farms is three to five times that of conventional power, and unless the government changes the scheme that return is only going to get better.

In an act of rent-seeking genius, the renewable lobby managed to persuade the Rudd government to set the 2020 target as a quantity — 41 terawatt hours — rather than 20 per cent of over-all power as originally proposed.

Since the target was set, the energy generation forecast for 2020 has fallen substantially, meaning the locked-in renewable target is now more like 28 per cent.

That will send conventional producers scrambling for certificates, pushing up their price beyond $100. It’s a mouth-watering prospect for the merchant bankers and venture capitalists who were smart enough to jump on board, and brilliant news for Mercedes dealerships on the lower north shore, but of little or any benefit to the planet.

The cost of this speculative financial picnic will be about $17 billion by 2030 or thereabouts, according to Deloitte, which produced a report on the messy business last week.

Since the extra cost will be added to electricity bills, the RET is a carbon tax by another name, a regressive impost that will fall most heavily on those with limited incomes, such as pensioners.

The lowest income house- holds already spend 7 per cent of their disposable incomes on energy, according to the Australian Council of Social Service. Energy takes just 2.6 per cent of the budget of those on high incomes.

Thus under the cover of responding to climate change — “the greatest moral, economic and social challenge of our time” — billions of dollars are taken from the poor and given to the rich investors in the unsightly industrial turbines that are blighting the lives of rural communities and stripping value from the properties of people who just wish to be left to live in peace.

If the anti-Abbott budget bashers who are squealing about a minor adjustment to pension indexation were serious, they would demand the end of the RET’s iniquitous transfer of wealth.

Yet ironically they find themselves on the side of crafty merchant bankers in the romantic expectation that this complex financial ruse is doing something to assist the planet.

To speak up in opposition to this social injustice is to find oneself condemned as a climate change denier, right-wing ideologue, apologist for the coal industry or, worse still, to be ignored altogether, as the ABC’s Four Corners managed to do in its renew- able energy special last month.

The corporation flew reporter Stephen Long to California to tell us how wonderful the renewable energy bonanza is going to be and how foolish Tony Abbott’s government is to even question the proposition that too many windmills are barely enough.

“This government has an ideological agenda,” insisted John Grimes, chief executive of the Australian Solar Council.

“They want to carve out the impact of renewable energy on the network and they want to stop renewals in their tracks.”

Jeremy Rifkin, author of a book called The Third Industrial Revolution, told Long: “Australia’s the Saudi Arabia of renewable energy. There’s so much sun; there’s so much wind off the coast, and so it makes absolutely no sense when you have an abundance of renewable energy, why would you rely on a depleting supply of fossil fuels with all of the attendant consequences to society and the planet?”

Fatuous arguments of this kind are rarely challenged on the ABC, nor are the purveyors of renewable energy subjected to the degree of scepticism that others with corporate vested interests can expect. Instead they find themselves in the company of a cheer squad.

“The new developments with renewable energy and storage seem to have passed the Prime Minister by,” Long editorialised halfway through his dispiriting report.

Finally, however, as Long was about to run out of time and throw back to Kerry O’Brien, he let slip the awkward truth he had managed so far to avoid.

“Yes, it costs money to create the infrastructure for renewable energy,” he says. “A lot of money.”

Indeed it does, and if the arbitrary, inefficient and regressive mechanism of the RET is all that is left to overcome that hurdle, we may as well give up.

It is through this complicated method that the consumers are forced to pay a subsidy to wind farms without the need for a carbon tax.