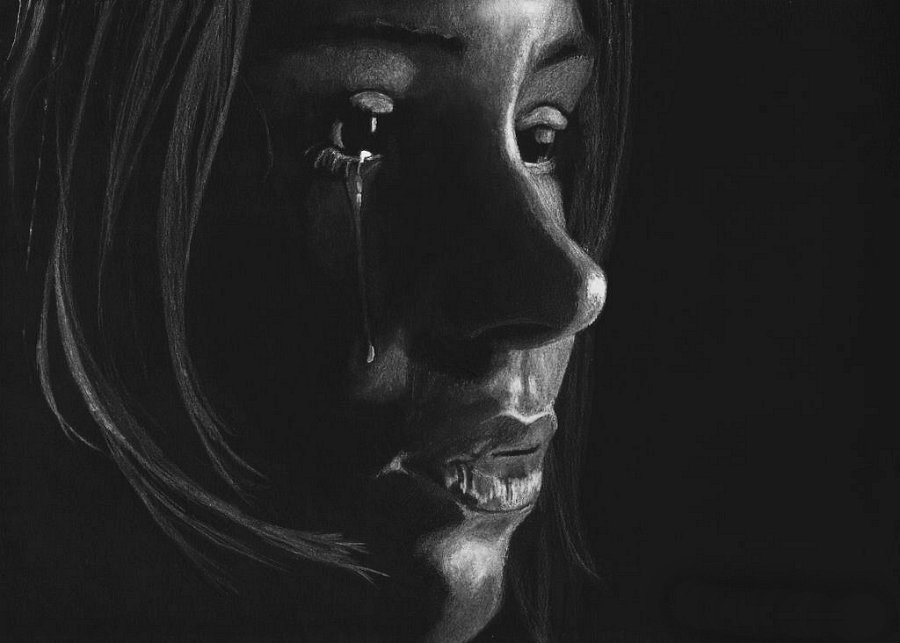 .
Editor’s note:  No, this isn’t Rosemary Lester.  Rosemary Lester is Chief Medical Officer of the State of Victoria, Australia.  Dr. Lester is the recipient of the letter reprinted, below — from a woman, a middle-aged woman, who, as she wrote the letter, couldn’t stop weeping.  Her name is Melissa Ware.

The tragedy is, Rosemary will almost certainly reject Melissa on every request.

How so?  Dr. Lester steadfastly refuses to investigate the screamingly obvious health problems at wind farms within her jurisdiction.  Instead, her department published a report denying physiological impacts from wind turbine infrasound and low frequency noise (ILFN).  A report effectively trashing the work of Professor Alec Salt (Dept. of Otolaryngology, Washington University School of Medicine, Missouri, USA), Professor Colin Hansen, Dr. Nina Pierpont, and a host of other researchers & clinicians who have demonstrated — drum roll, please! — direct physiological impacts from wind turbine ILFN.  (Does this tin-horn bureaucrat know something these clinical researchers — with credentials that eclipse hers — don’t know?)

Leading to the obvious question:  What happened to Dr. Lester’s duty of care as senior medical officer?  Where is the state’s duty of care?  Lester can’t claim she knows nothing about the suffering; Annie Gardner bombards her with emails, even as sick and suicidal residents have met with Lester and her department — for naught.

“Rosemary, what the fuck is going on, honey?” (It’s time to use her first name, reminding her that the “doctor” stuff is professional horseshit.  Above all, she’s a human being, dammit, and from our perspective she’s doing a really bad job at that task.  Not, “First, do no harm,” but “First, be a human being for God’s sake!”)

Rosemary’s own medical staff admitted they knew there was a problem with Wind Turbine Syndrome.  We refer to Dr. Simon Slota-Kan and Dr. Stephanie Williams.  Both physicians admitted to the community and to directors of the Waubra Foundation (meetings in April 2011 at Evansford and on 14th October 2011 in the health department offices in Melbourne), that they knew there were real health problems from turbines!  Indeed, at the April meeting, Drs. Slota-Kan and Williams said research money was available.

“Um, Rosemary, what happened to the money, honey?” 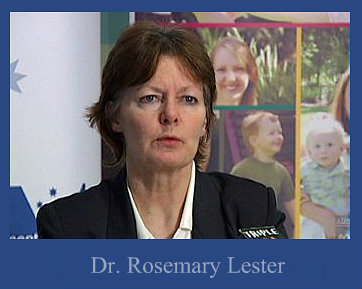 None of these pleas, none of this evidence, has moved this woman or her department to conduct a health impact assessment, again, despite repeated requests and, indeed, despite it being her legal responsibility.  And despite it being obvious, for Chrissakes, Rosemary!  (Why is this woman still in this job?  Is anyone in the govt. paying attention?  Where’s the media?  Hello!  Anyone home in the Land of Oz?)

(Reporting on the Adolf Eichmann trial in Jerusalem, Hannah Arendt was struck by what she called “the banality of evil.”  The government bureaucrat just — doing his job.) 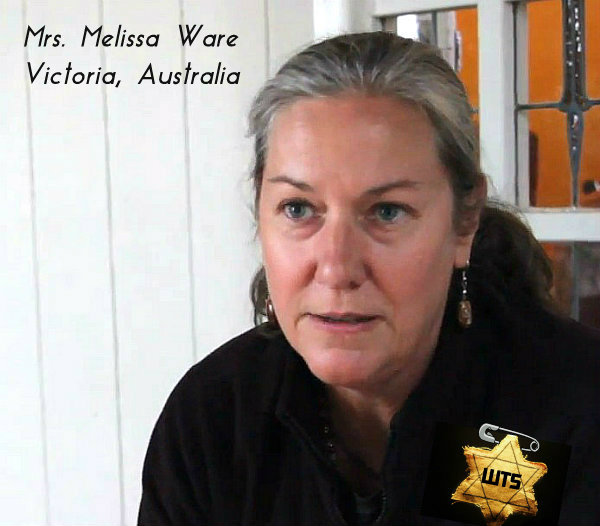 Anyhow, read on.  Melissa Ware is one of many sufferers under the official, certified, legal, state-mandated, medically approved & authorized & licensed care and protection of Rosemary Lester.  (Why does she still hold a medical license?)

This abuse and torture have got to stop, now!  Too many of us, including children, handicapped and elders are physically, emotionally and mentally exhausted, too many of us are fed up, and too many of us are forced to live with preventable pain caused by operating or proposed industrial wind facilities.

You and your Department are well aware of impacts of industrial wind turbines on human health from reports from Victorian residents.  This document explains precisely what is occurring for residents living in quiet rural areas and what physiological harm is occurring (click here).

We experience many health problems living next door to the Cape Bridgewater Wind Farm in South West Victoria. I have read the statement by Mr. Mark Duchamp from the World Council of Nature (click here).

Today it’s difficult to stop crying.   Not only is human health being ignored, animals are severely impacted by wind turbines as well.  Tears are flowing because not only are animals not protected from harm, neither are we residents. We can no longer bear the impact of our experiences near wind facilities not being heard, not being acted on and not being prevented.

GP’s and Specialists advise the cure is to “move away,” give limited instructions and advice, proffer prescriptions and pills, request blood tests etc. to discover the cause of ill-health and as required by law to provide correct diagnosis and treatment; expensive measures on a national scale and our health and well-being deteriorates.  Relocation is unaffordable, our home deemed unsalable according to the valuer engaged by the bank holding our mortgage.  We have followed instructions of the Health Department, Department of Planning, and Glenelg Shire Council and co-operated as requested, with Pacific Hydro whom own the wind facility.

We are traumatised by the inhumanity being shown towards our communities.

We hit our heads against a medical system brick wall over and over again, in attempt to be simply being heard.  To repeatedly point out independent noise testing in our homes detects noise problems, that these noises are the direct cause of headaches, illness and many health problems. To repeatedly be put down, dismissed and told “there are no problems near wind farms” and “there’s nothing we can do” or “there is no evidence” or “move away.”

For those responsible for our pain, to legally speak, “Ignorance is no excuse,” and you will be held to account.

The 2011 “Senate Inquiry into the Impact of Wind Farms” called for more research into wind farm noise, as does Prime Minister Abbot’s government, as does Minister Guy, as does the National Health & Medical Research Council (NHMRC), as do many senators and professionals and persons of integrity wanting to see justice for people and communities who are negatively impacted and suffering.

Solid stone homes, concrete slabs, corrugated roofs and sheds, even the ground vibrates to the sound energy emissions from the turbines.  Bodies and internal organs and tiny bones, vibrate to imissions and are blasted by pressure waves. Years of exposure to bodily harm; infrasound and low frequency noise bombard every living cell. Prolonged exposure to noise and resulting sleep deprivation causes harm.

Negative impacts have been well researched and documented.  Dr. Kelley defined and established health protective exposure limits for wind turbine infrasound and low frequency noise, which state and federal governments, including the NHMRC, have been repeatedly made aware of, yet choose to ignore.

The Association of Veterans Affairs Audiologists in America in 2010 documented the effects of infrasound and recommended levels of exposure determined by various highly regarded bodies such as NASA etc. (click here).

Not to noise, not to infrasound, not to blade flicker, not to vibration within our homes, not to electromagnetic radiation — no one is monitoring this industry.  People living next door are required to report faults, or fires, or blade damage or noises.  There’s seemingly no safeguarding whistles and bells, as reported at this wind facility.

Environmental noise exposure risks public health, and is recognised by international bodies such as the World Health Organisation and the US Center for Disease Control.  What are your directives for managing wind farm harm?  What are you doing to protect people from wind industry interference in health management? Interference revealed by Senator Madigan in parliament recently regarding wind farm communications with medical clinics in the Western District, including two clinics in Portland (click here).

How much longer are we to bear ongoing wind farm abuses?   Six, ten, twenty, thirty years reporting problems and nothing has been done to cease the pain and harm.  We’ve been palmed off from one government department to another and eventually ignored or derided.  All the while, infrasound and low frequency noise, audible noise and vibration from the turbines tortures us.

Noises annoy us, sleep eludes us

Denial of the problems and this form of torture is unacceptable.  No doubt litigation will occur here in Australia as it has  overseas, with turbines being ordered to be pulled down in Portugal, because of proven vibroacoustic disease in animals and humans.  In December 2013, Justice Muse ordered the wind farm in Falmouth, Massachusetts (USA) to be turned off at night to prevent “irreparable harm to physical and psychological health.”

How often is it to be repeated that people, physicians, the public, administrators must be better educated regarding the issues we’re daily confronted with?  The Health Department, the EPA, the NHMRC and government are where such awareness and education begin, where solutions are enacted.  Departments, professionals and government representatives, including local government, need to consider their advice (or lack of), their own behaviour, adhere to their standards of conduct and act with integrity and honesty, and have no conflicts of interest and actively advocate on our behalf.

Even the wind industry  admits to problems of noise, engineering design and maintenance.  (See, for example, lubrication problems and poor or incorrect installation or siting.)  Section 5.1.1 of the draft New Zealand standard on wind farm noise, 2009, states:  “Limits for wind farm noise are required to provide protection against sleep disturbance and maintain reasonable residential amenity.”

THIS ABUSE AND TORTURE HAVE GOT TO STOP, NOW!  Too many of us, including children, handicapped and elders are physically, emotionally and mentally exhausted, too many of us are fed up, and too many of us are forced to live with preventable pain caused by operating or proposed industrial wind facilities.

Raising awareness starts by reading professional and personal statements.  You may begin here with responses made to the Australian Medical Association’s recent statement wrongly proclaiming no health effects from wind farms.

Your written response to this letter and URGENT action from you and your department, consistent with your legal, professional and ethical duties, are urgently required.