·
This notice is intended for “Directors of Wind Developments, Publicly Elected Officials from Federal, State and Local Government, and Bureaucrats in Relevant Departments”
· 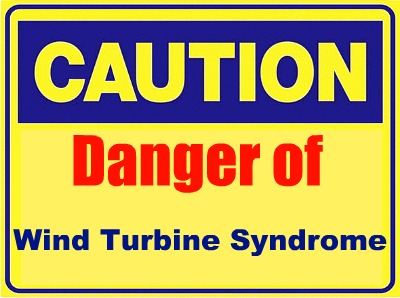 Be advised that, as a result of information gathered from the Waubra Foundation’s own field research, and from the clinical and acoustic research available internationally, the following serious medical conditions have been identified in people living, working, or visiting within 10km of operating wind turbine developments.

The onset of these conditions corresponds directly with the operation of wind turbines:

Other symptoms include those described by medical practitioners such as Dr Amanda Harry, and Dr Nina Pierpont in her landmark Case Series Crossover Peer Reviewed Study (submission No 13 to the Australian Federal Senate Inquiry into Rural Wind Farms) and published in Dr Pierpont’s book entitled “Wind Turbine Syndrome, A Report on a Natural Experiment,” 2009, published by K-Selected Books, Santa Fe.

These serious health problems were also identified by Australian General Practitioner Dr David Iser in 2004. Dr Iser formally notified the Victorian Government of the time after his patients became unwell following the start up of the Toora wind project. His warnings were ignored without being properly investigated by the authorities and politicians.

All this and supportive material has been made available to the boards of the major developers, State Ministers for Health and Planning and senior health bureaucrats. The time for denial, and of using the Clean Energy Council to shoulder the increasingly difficult task of denying the link between adverse health and operating wind turbines, is over.

At the Toora and Waubra wind projects, some seriously ill affected residents have been bought out by the developers, but only after they signed confidentiality agreements specifically prohibiting them from speaking about their health problems. This buy-out activity would support a conclusion that developers are aware of the health problems.

Meanwhile, wind developments have continued, with developers asserting that their projects meet acceptable standards, and thereby implying that they cannot be causing health problems.

The Foundation is also concerned that Vibro-acoustic Disease (VAD), as recorded and described by Professor Mariana Alves-Pereira’s team from Portugal, will develop in people chronically exposed to wind turbines. The disease has already been identified in the occupants of a house with levels of infrasound and low frequency noise identical to levels the Foundation is recording in the homes of affected residents in Australia.

The Foundation is aware of over 20 families in Australia who have abandoned their homes because of serious ill health experienced since the turbines commenced operating near their homes. Most recently, five households from Waterloo in South Australia have relocated, where the larger 3 MW turbines have had a devastating impact on the health of these residents. Some of these people have walked away from their only financial asset, to live in a shed or a caravan on someone else’s land.

The Foundation notes the mid-2010 advice from the National Health and Medical Research Council that a “precautionary approach” be followed. We are not aware that either industry or planning authorities have adopted this exceedingly valuable and important advice.

The Foundation’s position, as the most technically informed entity in Australia upon the effects of wind turbines on human health, is this: Until the recommended studies are completed, developers and planning authorities will be negligent if human health is damaged as a result of their proceeding with, or allowing to proceed, further construction and approvals of turbines within 10km of homes. It is our advice that proceeding otherwise will result in serious harm to human health.

We remind those in positions of responsibility for the engineering, investment and planning decisions about project and turbine siting that their primary responsibility is to ensure that developments cause no harm to adjacent residents.  And, if there is possibility of any such harm, then the project should be re-engineered or cancelled. To ignore existing evidence by continuing the current practice of siting turbines close to homes is to run the dangerous risk of breaching a fundamental duty of care, thus attracting grave liability.

Editor’s note:  Click here for a PDF of the above notice.