For every “green job” created, 3.7 jobs are lost (United Kingdom)

Editor’s introduction:  Compare this study to a comparable analysis done for Spain several years ago, where economists discovered that  2.2 jobs were destroyed for every “green job” created.

I. This report examines the costs and benefits of government policy to support the renewable energy industry in Scotland and the UK. The Scottish Government in particular is promoting the renewables sector as an economic opportunity, and the purpose of this report is to assess whether this is justified. The report therefore does not investigate measures designed to reduce carbon emissions directly, nor does it consider the merits of renewable technology as part of the attempts to slow climate change.

II. The report’s key finding is that for every job created in the UK in renewable energy, 3.7 jobs are lost. In Scotland there is no net benefit from government support for the sector, and probably a small net loss of jobs. 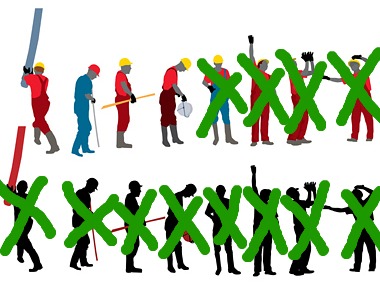 III. The lower level of job displacement in Scotland is because of the greater concentration of renewable energy generation in Scotland. This means that electricity consumers and UK taxpayers subsidised the Scottish industry by c £330m in 2009/10 over and above subsidies paid for by Scottish taxpayers and consumers. To the extent that the Scottish industry is a success, it is reliant on the wider UK policy making framework, in particular the Renewables Obligation Certificate (ROC) scheme.

V. In addition, both the UK and Scottish Governments have introduced a wide range of grants and subsidies for the renewables industry. These are estimated at £188m UK wide and an additional £22m in Scotland in 2009/10. Further, an exemption from the Climate Change Levy for renewable generation costs HMRC £77m UK wide and £25m in Scotland in lost tax revenue.

VI. The renewable energy sector imposes other indirect costs on the economy, mainly from its impact on the local environment and landscape. While there has been some research into aspects of this, there is no conclusive data, so these costs are not included in the calculations used in this report. In total, measurable policies to promote renewable energy cost £1.4bn UK wide and £168m in Scotland in 2009/10.

VII. A number of studies have attempted to measure the wider impacts of such policies. Research in Spain, Germany and by the EU suggests that net employment effects are negative with the likely opportunity cost, or costs associated with higher energy prices, outstripping the creation of green jobs. Many of these studies cite possible localised benefits during the construction phase of renewable energy infrastructure and the potential for longer term benefits if export markets can be established.

VIII. This report uses the Scottish Government’s own macroeconomic model for Scotland to assess the impact of identified costs on jobs. A similar model was used by the Scottish Government to measure the opportunity cost of the cut in VAT implemented in 2008-09. Based on this, policy to promote renewable energy in the UK has an opportunity cost of 10,000 direct jobs in 2009/10 and 1,200 jobs in Scotland.

X. Extrapolating from wider energy industry data, and comparing this to estimates from government and industry bodies, total direct employment in renewable energy generation can be estimated at 2,700 in the UK and 1,100 in Scotland in 2009/10.

XI. In conclusion, policy to promote the renewable electricity sector in both Scotland and the UK is economically damaging. Government should not see this as an economic opportunity, therefore, but should focus debate instead on whether these costs, and the damage done to the environment, are worth the candle in terms of climate change mitigation.

XII. In Scotland, it should be recognised that the industry is reliant on UK wide support. Scottish policy making in isolation would be much more expensive. The Scottish Government, like its counterparts in the rest of the UK, should establish much more accurate figures on the extent of the industry to engender a more rational debate on the subject.