A family from southwestern Ontario has launched a $1.5 million lawsuit accusing power company Suncor Energy of inflicting a long list of serious health issues on them by erecting a wind farm next to their home.

“It was just like the whole room was spinning,” says Lisa Michaud of Thamesville, Ont. as she recalled the weeks after the Kent Breeze wind farm began operating in May. “The noise at night keeps you awake. But it’s not just the noise that you hear.

“It’s something else that’s coming at you constantly that you don’t hear, but you feel. It’s just not right.” 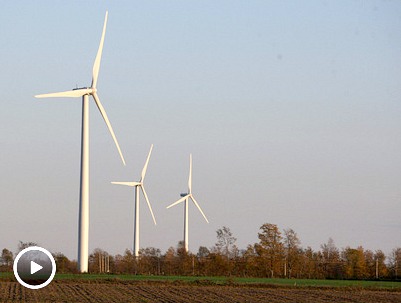 Click on image to watch video interview with Michauds

·
Lisa, her husband Michel, and their two children, Elisha, 25, and Joshua, 21, claim that eight industrial turbines next to their property create a “tunnel effect” of noise pollution, light flickers and low-frequency sounds.

In their lawsuit, they accuse Suncor Energy Services Inc. and Macleod Windmill Project Inc. (owners of the Kent Breeze development) of negligence, nuisance and trespass, claiming the wind turbines have caused debilitating vertigo, sleep disturbance, headaches and ringing in the ears, as well as stress, depression and even suicidal thoughts.
·

The case is significant because it’s the first lawsuit involving the Kent Breeze project — the subject of extensive review and scrutiny by Ontario’s wind regulators, the Environmental Review Tribunal.

“People knew full well going into this specific project that there were likely going to be problems,” says the Michauds’ lawyer, Eric Gillespie. He says that while the ERT ruled in July that the Kent Breeze project can continue to operate, it also acknowledged testimony from numerous experts called by all sides — wind farm opponents, Ontario’s Environment Ministry, and even Suncor Energy itself — that the project could potentially pose risks to human health.

In its ruling, the ERT concluded that “the debate should not be simplified to one about whether wind turbines can cause harm to humans. The evidence presented to the Tribunal demonstrates that they can, if facilities are placed too close to residents …The question that should be asked is: What protections, such as permissible noise levels or setback distances, are appropriate to protect human health?”

Jennifer Lomas, a spokeswoman for Suncor Energy, would not address the suit directly, saying it’s now before the courts, but said:

“The tribunal decision did acknowledge that there are some risks and uncertainties associated with wind turbines that merit further research. However, we are confident that the large amount of research that was presented at the tribunal, and this is research from scientific experts right around the world, has not shown a direct correlation so at this time it should not defer wind development.”

Ontario regulations stipulate that wind turbines must be a minimum of 550 metres away from any homes.

The Michauds say they live twice that distance, a full 1,100 metres downwind from the closest turbine, but maintain they continue to suffer negative health consequences as a result.
·

The government continues to justify the expansion, relying on advice from Ontario’s Chief Medical Officer of Health, Dr. Arlene King, who, in May of 2010, concluded after reviewing research from around the world that there exists no direct evidence of any link between wind turbines and human health problems.

“They can say what they want, but unless they come and live in my backyard, they are not going to know what it’s like,” Lisa Michaud told CBC News. “Reading literature and looking at a stack of papers, [instead of] coming out and talking to actual people who are living it every day on the front line, is totally different.”

The Michauds have recruited pharmacist and former Health Canada researcher Carmen Krogh, who has been collecting data on health impacts from more than Ontario families. Her peer-reviewed survey says there is ample evidence of “indirect” health consequences of living next to industrial wind turbines.

“They missed the indirect pathway, which is really critical,” said Krogh. “Things like sleep disturbance and annoyance, which is acknowledged as a health effect, because it increases stress levels.

“So the chief medical officer of health missed about half the equation here.”