“Get the hell out of here!” Farmers to Wind Developer (Australia)

Editor’s note:  At a recent “informational” meeting in Collector, Australia, the wind developer was told, “Pull up stumps and disappear off my land,” by Aboriginal Elder, Shane Mortimer—the man in the broad-brimmed hat, below.  Mortimer then adding, “Get the hell out of here!”—in case the developer didn’t quite grasp the meaning of “disappear.”

Three cheers for a gutsy Australian!  Why are not more people telling these bums to “beat it!”

Click anywhere on the ABC News video, below, to watch the entire scene.  It’s fabulous!

Let this become the rallying cry against Big Wind, everywhere:  “Get the hell out of here!”
. 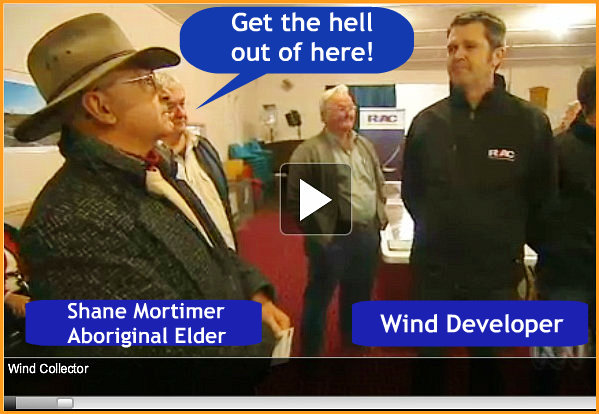