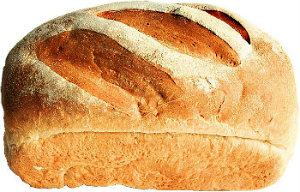 Fortnightly she makes her bread. For all the years I have known her she has done so. Five loaves, that’s all that can fit in the oven. It is enough. Enough for two weeks? No, for I too live by more than bread alone. It is enough grace. Remember how five loaves and two fish fed five thousand—through immense compassion.

Where there is such compassion faith comes easily: faith to move mountains, faith to feed a multitude. What mattered then, as now, was not the thrifty logic of bread but the power to see something as worthy of the full impact of the universe, whose logic and majesty is sustenance. To live filled by such amazing grace. Such imagination! Who else could have imagined feeding such a multitude? Out there in the desert.

Everything is possible, he whispered, as he blessed the bread and broke it and gave it away. In the exercise of grace numbers dissolve into absurdity, are confounded of meaning. One so gifted, so possessed, so engaged need not pause to calculate whether it is possible or not—such puny questions, allowing of doubt, fear even.

Only those for whom faith comes hard are fearful, he said. Faith can come hard only for the uncompassionate, I say.

Every fortnight she bakes her bread, five loaves, from a compassion that could feed a multitude. For me.