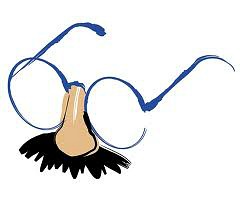 Somehow, over the centuries, Americans lost their power.  I mean ordinary schmucks like you and me.  (Disclosure:  My ancestors settled tidewater Maryland in the 17th century.  They fought in the French & Indian Wars, American Revolution, and so on.)  We made a Big Federal Union on the back of (eventually) fifty Big States and, over time, allowed Big Business to take over and run the whole shebang—and style itself Big Government.

Here’s a dumb question.  Is any of it truly necessary?  I mean, couldn’t all this stuff be done by the Citizenry instead of Big Business?  (I live near a large Amish community.  The Amish would answer with a thunderous, “Yes!  The people can do it themselves!”)

Wait a minute!  Didn’t the signers of the Declaration of Independence envision a Government of “We, the People” doing it ourselves?  (Little-known historical fact:  Between the Revolution and the adoption of the Constitution, and continuing into the early years of the new Republic, there was a 2nd, quiet Revolution tilted very much in favor of Big Business.  Oops!) 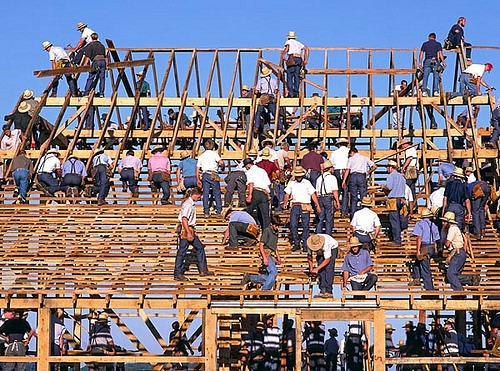 .
Maybe all the so-called good stuff done by Government is a sideshow orchestrated by Big Business to convince all of us dumb bastards that Government is necessary and doing something essential.  Whereas the real business of Government (aka Big Business) is to levy taxes and screw us with regulatory agencies and laws—and, above all, have us buy stuff.  (Did you perform your patriotic duty today, and go shopping?)

Till now, it was Big Business (aka the Government) screwing the other guys—overseas.  Now, it’s here; now Government screws its own citizens.

Has your community been “fracked” yet?

Has it been “windfarm-fucked” yet?

Has it had all its manufacturing moved “offshore”?  (That’s the story of Franklin County, NY, where I live.  Once prosperous.  Could still be.  Now, the poorest county in the state.)

How about toxic waste dumped nearby?  (Talk to the Mohawk Nation, just to the north of me.  They’re about to go to war over the toxic shit dumped by Big Business on the rez.  Yeah, soaring cancer rates.  Dr. Pierpont used to be the pediatrician for the rez.)

Hey, how about Gulf Oil Spill Sickness?  Haven’t heard of that one, right?  ‘Cause the NY Times won’t report on it.  Click here for the scoop.  Prepare to shit your pants!  (By the way, the Times won’t report on WTS, either.  We tried, but someone got to the head of the Op-Ed Dept at the last minute.)

How about Wall Street bank bailouts?

All the above is really necessary stuff, for sure—right?

If I’m right, it’s Big Business screwing Consumers—all under the pretense of Government caring for its Citizenry.

Have a splendid 2012 voting for the Big Imposter.  (And remember:  Shop till you drop!)