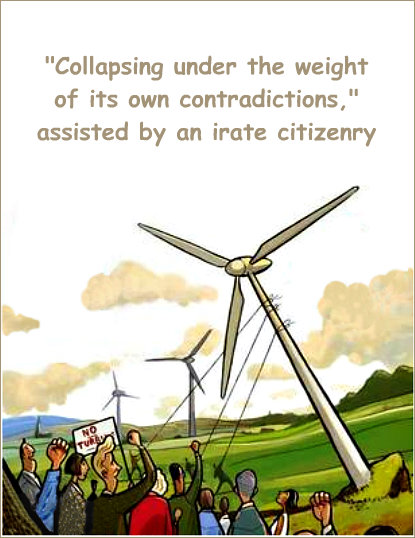 With appreciation to The Spectator

It did not take long. Last month, Matt Ridley argued in a Spectator cover story that the wind farm agenda is in effect dead, having collapsed under the weight of its own contradictions. The only question is when our ministers would realise. In an interview with the Sunday Times (£), climate change minister Greg Barker admits that his department has adopted an ‘unbalanced’ approach to wind farms and will now look at other options. ‘Far from wanting thousands more, actually for most of the wind we need … they are either being built, being developed or in planning. The notion that there’s some new wave of wind [farms] is somewhat exaggerated.’

Indeed, the phrase ‘somewhat exaggerated’ applies to the case for wind farms itself. There are a staggering 3,500 wind turbines in Britain, what to do with them all? Ridley had this suggestion:

It would be a shame for them all to be dismantled. The biggest one should remain, like a crane on an abandoned quay, for future generations to marvel at. They will never be an efficient way to generate power. But there can be no better monument to the folly of mankind.”

To Ridley, this was—at root—an intellectual error. An example of how the establishment, and entire government machine, can sponsor something that makes no economic or environmental sense—but no one dares point this out, because the cause is seen as noble. He has generously sponsored the £8,500 Ridley Award for essays that expose similar environmental fallacies and entries close on 30 June. We’ve had plenty of brilliant entries so far—but keep them coming. Click here to find out more.