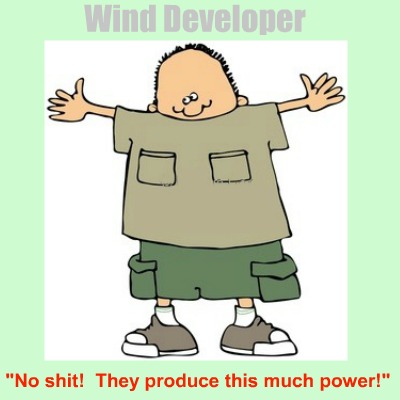 Kibby Wind Power I and II, a 132 MW windplant, capital cost $330 million, is owned by TransCanada and was built, after a lot of destruction, on one of the most beautiful ridgelines in the State of Maine.

Its Federal Energy Regulatory Commission (FERC) designation is Trans Canadian Wind Development, Inc., in case you wish to look up the data, below.

In 2009 and 2010, the facility had a lot of startup problems and its energy production was negligible.

Why are the CF’s (Capacity Factor) so low?

Winds on ridgelines have highly-irregular velocities and directions. This does not show up when one does wind velocity testing for feasibility, but when rotors are 373 feet in diameter, one part of a rotor will likely see a different wind velocity & direction from another part.

This results in highly inefficient energy production and CFs. Wind vendors (sellers) are very familiar with this, but neglect to mention it. However, all is explained in this article. I recommend the Vermont Dept. of Public Service and (Vermont) House Environment and Energy Committee, and all others, finally read this article, before “leading” Vermont into an expensive energy La-la-land.

The New York State wind turbine CF’s also do not live up to claims. The Vendor promises were for capacity factors of 30% to 35%, before installation.  The reality, after installation:

The above data were obtained from the 2011 New York ISO (Independent System Operator) Gold Book.

Because no wind turbines were added during 2010, the 22.7% capacity factor of 2010 is the best proof of the lack of performance of the New York State wind turbine facilities.

This reality is not unique to Maine, Bolton Valley and NY State. It has replicated itself in The Netherlands, Denmark, England, Germany, Spain, Portugal, Ireland, etc. The production is invariably less than promised. Add this to the fact that the CO2 emissions reduction is much less than claimed, as shown in these articles (click here and here and here and here and here), and further investments in wind energy clearly become an extremely dubious and expensive proposition.