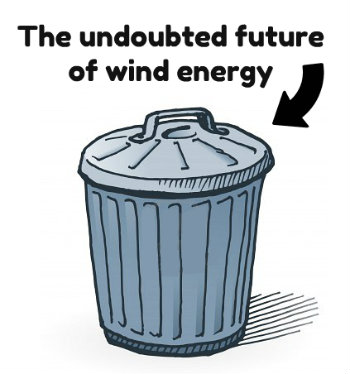 Wind energy, “an industry that makes no economic sense”

Americans should hope that winds of change — and sanity — blowing away pro-wind-energy policy in the United Kingdom waft all the way across the Atlantic, sparing U.S. taxpayers the bills for further subsidies of an industry that makes no economic sense.

The U.K. then saw wind farms as needed to meet its European Union commitment to produce nearly a third of its electricity from renewable sources by 2020. But that policy’s now fallen victim to commonsense objections raised by communities and members of Parliament across party lines — objections that are just as valid on this side of the ocean.

The 3,500 onshore wind turbines that the U.K. already has produce only a quarter of their electrical capacity due to wind’s unreliability. And U.K. taxpayers have been subsidizing them at “100 percent on all the power they produce,” making wind power far more costly than conventional energy sources, Mr. Booker writes.