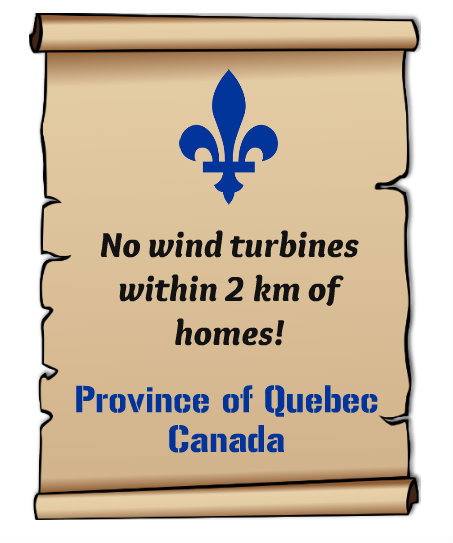 Editor’s note:  The following article was translated from French using Google Translate.  The photo, below, accompanied the article.  It shows the wind developer, Mr. Desgroseillers, pointing out where he had planned  to build his “wind farm”—before  the new law, passed last month, booted him out. 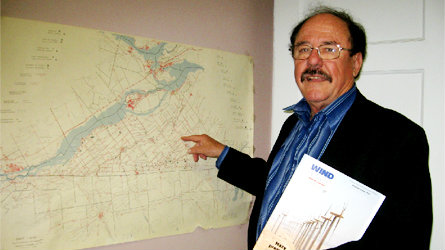 No wind turbines can be built less than 2 km from a home and 1 km of a road in the Haut-Saint-Laurent, in the Montérégie.

The Quebec government has officially endorsed the amended interim control (RCI) of the Haut-Saint-Laurent surrounding these structures in its territory, which the council of mayors adopted on 9 January.

“The Regulation respects the policies of the government in terms of development.  Therefore, under the Planning Act and planning, it shall take effect the day on which this notice is served,” the minister said in this letter for the prefect of the MRC, Alain Castagner.

In the territory of Haut-Saint-Laurent, this revised version of RCI forbids the erection of wind turbines 2000 m (2 km)  from any dwelling and 1000 m (1 km) from any public road.

The new version of RCI also seeks to protect agricultural fields, cultivated floodplains, and woodlands, as well as bike lanes from the presence of wind turbines. It also establishes the 1000 m distance between the turbines and the Linear Park of the Haut-Saint-Laurent and 2000 m separating the site Droulers / Tsiionhiakwatha Saint-Anicet.

“As a prefect, I’m glad that the RCI has finally been accepted by the Minister,” said the mayor of Saint-Anicet and prefect of the MRC, Alain Castagner, in a telephone interview.

Mr. Castagner stated that the Minister would have been wrong not to endorse the RCI changes because, he said, “the government had endorsed the approach taken by the Haut-Richelieu last year and we were inspired to amend ours.”

The prefect insisted that any wind farm developers in the region will meet the requirements of the new RCI. “The aim of RCI does not prevent the construction of wind turbines in the MRC, but establishes reasonable distances (setbacks) in an effort to protect the citizens,” he said.

Godmanchester residents opposed to the construction of ten turbines in the municipality, warmly welcomed Minister Gaudreault’s decision. “I’m very happy for all citizens. This is very good news.  People felt they were listened to by our leaders. The minister’s response pleases us greatly,” said the spokesman of the group, Carole Trepanier.

Ms. Trépanier recalled that in a letter sent Nov. 13 to Minister Gaudreault, she wanted to raise awareness of the mobilization orchestrated by those citizens who oppose construction of  ten turbines in Godmanchester. “We wanted to persuade the government to be protect us from wind turbines affecting our health. We wanted to demonstrate that wind turbines in Godmanchester would have negative impacts on the beauty of the landscape and property values,” she said.

Ms. Trépanier also pointed out that 570 people have so far signed the petition launched in recent weeks in the region against the construction of a wind farm in Godmanchester. “There was no community support for the project. Citizens have supported us in our efforts, because we educated them,” she said.

Ms. Trépanier said she was relieved to see that all elected municipal leaders of Haut-Saint-Laurent became aware of the “health hazards posed by wind turbines.”

The president of International Barter, Jean-Claude Desgroseillers, said he was disappointed by the acceptance of the new RCI by the minister, adding that such a decision would effectively block any future construction of wind turbines in the MRC.

With this new version of RCI, the prefect of the MRC wondered if there are still areas of land in the Upper St. Lawrence where it will be possible to build wind turbines. “If such areas remain, they would have to be large,” he said.