The proposed turbines are too big and emit too much noise energy. Highland Windfarm, LLC, is proposing a grand experiment with the Town residents as the guinea pigs” 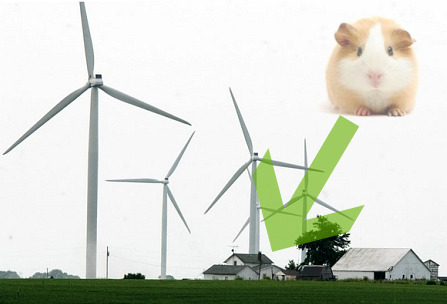 Editor’s note:  The following testimony by Dr. Paul Schomer is of great importance to any community currently facing the prospect of wind turbines.  Dr. Schomer is a seasoned noise engineer with considerable experience measuring wind turbine noise emissions.  He has now become convinced that (a) wind turbines do in fact cause direct health effects (as opposed to the silly, even inane, idea proposed by Simon Chapman and Geoff Leventhall [and here)] that this is all a matter of “nocebo” effect—that is, “power of suggestion”); (b) he argues that the current generation of huge turbines is inappropriate for communities of people; and (c) he scoffs at the facile and clueless efforts of wind company-hired noise engineers to somehow curtail the infrasound emissions.

Below are excerpts from Schomer’s recent (7/29/13) testimony before the Wisconsin Public Service Commission regarding a proposed windplant in the Town of Highland, Wisconsin.

“Rehearing direct testimony Paul D. Schomer” (7/29/13)  Application of Highland Wind Farm, LLC, for a Certificate of Public Convenience and Necessity to Construct a 102.5 MW Wind Electric Generation Facility and Associated Electric Facilities, to be Located in the Towns of Forest and Cylon, St. Croix County, Wisconsin.  Docket No. 2535-CE-100

» “Highland is proposing a grand experiment with the Town residents as the guinea pigs. The proposed turbines are too big and emit too much noise energy. In the wake of the severe health impacts experienced by some residents in the Town of Glenmore, which has similarly large turbines, it is troubling that Highland refuses to consider a full redesign of this project.”

» “There is significant evidence from all over the world that large turbines placed too close to residences cause very serious health problems. While the research is underway, there is continuing focus on balancing the size and output of wind turbines with public health. I do not believe that the right balance has yet been struck. The wind industry continues to claim that there is no known link between wind turbine noise and health effects.”

» “In a recent paper, which is being submitted as Ex.-Forest-Schomer-20, I show that for a small group of specially selected people, the probability that motion sickness-like symptoms experienced by wind farm residents are unrelated to wind turbine noise is less than two in a million. This analysis proves that it is virtually certain that these individuals are adversely affected with serious health effects that result from the acoustic emission of nearby wind turbines. This changes the dynamic of the situation. Since it can no longer be said that there are no known health effects related to wind farms, it follows that the industry must prove that there will be no adverse health effects from what they plan to do, or that the industry must state what the adverse health effects will be.”

» “In a paper to be presented and to be published in December 2013, which is being submitted as Ex.-Forest-Schomer-22, we show that the Massachusetts study’s conclusions about the lack of connection between human health and infrasound and wind turbine noise are flat out wrong.”

» “All the experts in this proceeding agree that the louder the turbines are in audible noise and the larger the turbines are in structure, the more infrasound will be produced. The larger mega turbines seem to correlate very starkly with health impacts. It is significant that in a wind farm with only eight turbines, three families have left their homes in the Town of Glenmore. As I testified earlier, if this farm is built as designed, it is likely that the same result will occur – with or without curtailment.”

» “Infrasound flows in all directions and its amplitudes are not reduced by which direction the sound originates. Adverse health effects from infrasound will not be abated by directivity. This is another reason to stick with ISO 9613-2 and IEC 61400-11, each as is, and not venture into the unknown.”

» “The history of wind turbines, as young as they are, is one of ever increasing size. Current units go from 1.5 to 3.5 MW, and bigger units can be expected in the future. Larger turbines may have the advantages of greater efficiency and net profit but they create more problems for people living close by. There is strong evidence that the very low infrasound frequencies produced by large wind turbines are the sources of acoustic emission that are adversely affecting people. As the power generated by wind turbines grows, the blades grow and hence the tip’s speed is reduced to avoid too high an advancing blade tip Mach number.”

» “According to a paper by van den Berg (2004), which is being submitted as Ex.-Forest-Schomer-22, the increase due to a typical nighttime wind profile (the change in velocity with altitude) was 5 dB for a wind turbine with a 58 m hub height, and up to 15 dB for a turbine with a 98 m hub height. That is, the increase in low frequency energies in size and magnitude may be substantial because of this blade-loading, wind-gradient effect, much greater than what is predicted for constant blade loading. The conclusion is that unless mitigation methods and strategies can be developed and implemented, bigger turbines are not necessarily better. They may actually be much worse for people.”