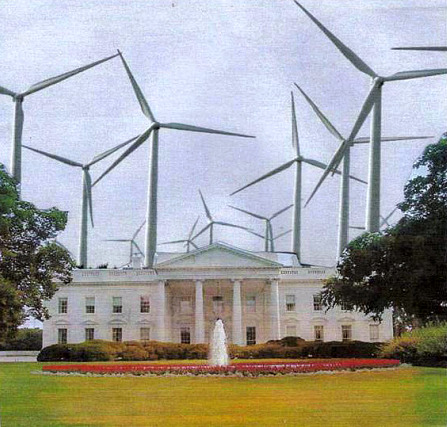 Nina Pierpont tells me she’s interested in knowing if President Obama, a grave and intelligent man whom she voted for and even financially supported, would give some thought to installing a cluster of 1.5 MW turbines 1500 feet from his back door.

Not such a preposterous idea, when you think about it.  A sort of “do as I do” or “follow my example” or “nation’s leader” demonstration of his own good faith and support for that multi-billion dollar renewable energy program he just signed into law.

Showing Americans–See, the President’s no NIMBY!

Like the above snapshot, which could have been taken in any number of communities across America.  But, hey, why not the White House?  (At least one piddling 1.5 MW on the front lawn?)

Oh hell, Barack, shoot the moon.  A 7 megawatter smack in the Rose Garden!  Whaddya say?  (History will never forget you, trust me.)

Ballerinas in the sky, is what I calls ’em.  With that real comforting, calming, soothing “refrigerator-like” humming 24/7.  Ideal for nodding Sasha and Malia off to sleep at bedtime.  Perfect for giving you and the missus sweet dreams and deep, deeply restful sleep.

Then there’s that thorn in the flesh, Daniel d’Entremont.  Now that Daniel’s abandoned his home, he says he’s getting a splendid night’s sleep.  (But, you wanna know the honest truth?  Daniel probably made it up, right?  I mean, all that moonshine about not sleeping and going nuts in his house.  He probably just wanted to move the family in with his parents and ditch his old neighbors.  Canadian humor.  It’s kinda weird, eh?)

Still, makes you wonder.  Would Mr. Obama abandon the White House?  Would it be, um, legal?  Jeez, could he sell it?  Come to think of it, would anyone in his right mind buy it?  (Barack, no one’s bought Daniel’s house!)

On further thought, it’s preposterous to imagine the nation’s First Family getting Wind Turbine Syndrome!  Nope.  What would the National Institutes of Health do if the President of the United States of America was awakened by “thump thump thump” or a howling “jet noise” every night at 2 am and couldn’t get back to sleep?  Plus tinnitus.  Ear pressure.  Headaches.  Nausea.  Dizziness.  Vertigo.  Visual blurring.  Tachycardia.  Irritability.  Panic attacks.  Cognitive and memory impairment.  Impossible!  And the incoming Portuguese Water Dog peeing on those lovely carpets and howling all night.  Impossible!

“Change you can believe in.”   Wind turbines in his own backyard.  It’s worth suggesting, isnt’ it?  I mean, the guy who dreamed up that line and parlayed it into the White House—maybe he’d go for it!