Editor’s note:  Art and Cheryl Lindgren have been much in the News.  They have become the anguished face of a well-intentioned community project gone terribly wrong.

On a crisp autumn day filled with speeches, hot dogs, and much applause, Fox Islands Wind cut the ribbon and powered up its 3 GE 1.5 MW turbines on the island of Vinalhaven. Within seconds, the home of Art & Cheryl Lindgren—mere yards away—turned into a living hell.

A year and a half later—a massive heart attack later—much acrimony and expense later—nothing is resolved.

The Lindgrens and their neighbors desperately hope the preacher’s wrong.  The turbines, agrees the State of Maine, are at least occasionally “out of compliance” with State noise standards. Fox Islands Wind disputes this, and says it’s a question of whose measurements one believes.  And there the matter rests—deadlocked.   Lawyer eyeball-to-eyeball lawyer.

Meanwhile, the Lindgrens and the Wylies and Faragoes and others live in torment, and, as if that were not enough, endure the malice and taunts of neighbors.†

Behold the torn asunder community of Vinalhaven, ME.

Monitoring the noise levels of the wind turbines outside their window has turned into both a heroic campaign and a nightmare.  Hell, with whistles & bells.  For the past year, Art has set about to prove unequivocally that the noise/vibration from the machine, seen below, exceeds even the wholly out-of-date State standards.

Here is his report. 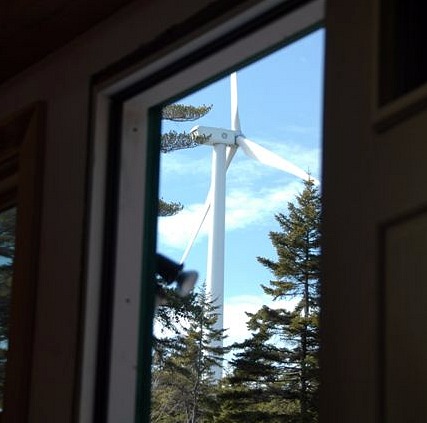 View from the Lindgren home, Vinalhaven, ME

In an effort to restore peace and health in our lives, our neighbors and we formed Fox Islands Wind Neighbors (FIWN).  One of its objectives has been to document noise compliance violations by taking certified sound level and MET tower measurements and submitting them as formal “complaints” to the Maine Dept of Environmental Protectoin (MDEP).

We have met with limited success.

The problems with this method and our current set-up are the following.  I offer these observations to communities who find themselves, sooner or later, in the same predicament as ours:

So, here’s what we’re working on: 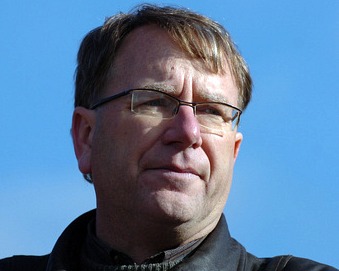 If you live where a wind company is trying to ruin your life, but which has not yet succeeded, it’s time to plan for what you’re going to do if they do manage to force their way in.

†The raw nastiness and downright brutality of the Comments which WTS.com received from Vinalhaven residents in response to this posting was astonishing.  Not surprisingly, we did not post them.


Comments Off on Decibels from hell (Maine)