A new study by a team of earthquake scientists (seismologists) in Italy has made a signal contribution to our understanding of wind turbine noise & vibration and, by extension, Wind Turbine Syndrome (WTS).

Before examining their research, however, we need to put it in context—the context of Wind Turbine Syndrome (WTS) and the central role played by the utricle and saccule in triggering WTS. 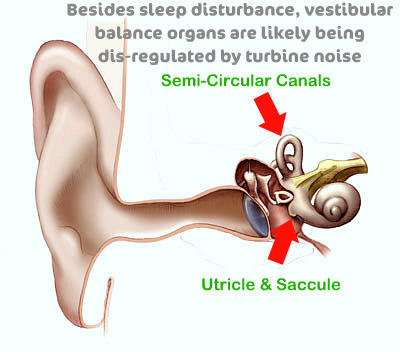 Secondly, we already know from human experimentation (Todd et al. 2009) that the utricle or saccule of the human is 15dB more sensitive to 100 Hz substrate-borne vibration than the cochlea.  In other words, when incoming noise is so quiet you can’t hear it, the utricle and saccule still pick it up.  Such is their phenomenal sensitivity!  Moreover, we know there is definitely an infrasonic (low frequency) range of sensitivity in the utricle and saccule, although, at this point, it’s unclear what exactly the range of these frequencies is.

In other words, the amount of vibration/bone-conducted sound was so small that the subjects could not hear it, yet the vestibular parts of their inner ears still responded to the vibration and transmitted signals into the balance and motion networks in the brain, resulting in specific types of eye muscle activation (eye muscle activation is a well-known marker for vestibular stimulation).

(Thanks to Dr. Alec Salt’s research, scientists now know that the cochlea suppresses the hearing detection of low frequency noise.  Notice, this does not mean the low frequency noise has no effect on the brain; it merely means our ability to hear it is suppressed, a fact the wind developers and their acoustician consultants don’t seem to grasp—or want to grasp?)

With this as background, consider the following: 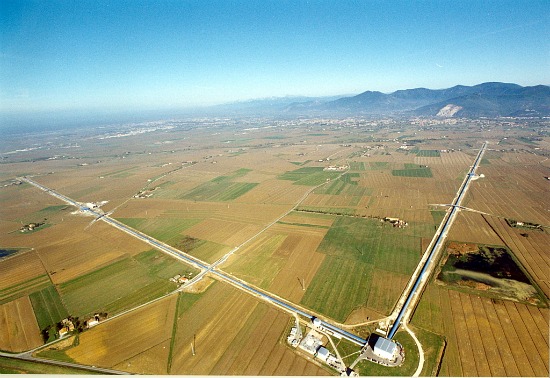 We present analyses of the noise wave field in the vicinity of Virgo, the Italian–French gravitational wave observatory located close to Pisa, Italy, with special reference to the vibrations induced by a nearby wind farm. The spectral contribution of the wind turbines is investigated using (1) onsite measurements, (2) correlation of spectral amplitudes with wind speed, (3) directional properties determined via multichannel measurements, and (4) attenuation of signal amplitude with distance.

Among the different spectral peaks thus discriminated, the one at frequency 1.7 Hz is associated with the greatest power, and under particular conditions it can be observed at distances as large as 11 km [6.8 mi] from the wind farm.

The spatial decay of amplitudes exhibits a complicated pattern which we interpret in terms of the combination of direct surface waves and body waves refracted at a deep (≈800m = half a mile) interface between the Plio-Pleistocenic marine, fluvial, and lacustrine sediments and the Miocene carbonate basement.

We develop a model for wave attenuation that allows determining the amplitude of the radiation from individual turbines, which is estimated on the order of 300-400 µms-1/√Hz for wind speeds over the 8–14 m/s range.

On the basis of this model, we then develop a predictive relationship for assessing the possible impact of future wind farm projects.”

·
The following are key points from the paper. (Text in grayscale was inserted by CLM to clarify the translator’s imperfect English.  Sometimes the grayscale text is meant as a substitute for the confusing original text, as in the first line, below; other times it is an elaboration on the original text.)

·
By In mid 2008, a wind park composed by of four, 2MW turbines was installed at some 6km east of VIRGO’s NE. After then subsequently, plans were submitted to local authorities for (i) adding three additional turbines to the existing wind park, and (ii) installing a new, 7-turbine wind park at a site located about 5km west of VIRGO’s WE. As a consequence, EGO (the European Gravitational Observatory) asked the Italian Istituto Nazionale di Geofisica e Vulcanologia (INGV hereinafter) to conduct a noise study aiming aimed at (i) verifying properties and intensity of the vibrations produced by the present aerogenerators wind turbines, with the ultimate goal of (ii) assessing the possible impact of the project wind parks.

The Vibrations depict show a complex spectrum, which includes both time-varying frequency peaks directly related to the blade-passing frequency, and stationary peaks associated with the pendulum modes of the heavy rotor head and tower, and to flexural as in flexing modes of the tower.

These disturbances noise/vibrations propagate via complex paths including directly through the ground or though principally through the air and then coupling diving locally into the ground.

Though weak, such vibrations may be relevant once compared to the local levels of seismic noise. Schofield (2001) found that the intense low frequency seismic disturbances from the Stateline Wind Project (Washington-Oregon, USA) were well above the local seismic background till up to distances of 18 km from the turbines. Similar distance ranges were found by Styles et al. (2005), who analysed the possible influence of a project wind park at Eskdalemuir (Scotland) in the vicinity of the UK Seismic Array. Fiori et al. (2009) studied the seismic noise generated by a wind park in proximity of to the GEO-600 interferometric antenna (Germany), and observed the signal from the turbines till at distances of about 2000m (2km = 1.24 mi).

In this work, we present the results from 81 seismic noise analyses in the vicinity of VIRGO, with special reference to the action of the wind park.  The paper is structured into four parts.

In the first part (Sections 2-3), we describe the geological setting of the study area and describe the data acquisition procedures. We then describe (Section 4) the spectral characteristics of the noise wavefield, and their relationships with human activities human-generated noise and the wind field.

In the third part (Sections 5 and 6), we use small- and large-aperture array deployments to investigate the directional properties of the noise wavefield and its amplitude decay with distance from the windfarm.

In the last part (Section 7) we propose an attenuation model involving the combination of direct cylindrical waves propagating at the surface, and body waves refracted at a deep (800m half a mile) lithological rock interface. This attenuation law is eventually used for establishing a predictive relationship for assessing the range of seismic amplitudes which are expected in association with narrow-band, shallow sources of noise.

Several of the frequency peaks, which correlate well with wind speed (e.g., 1.7, 3.5, 4.5 Hz on the NS component), attenuate as one goes farther from the wind park, thus reinforcing the hypothesis that these peaks are due to the action of the turbines. In particular, the peak at frequency 1.7 Hz is clearly observed also at VIRGO’s WE, about 11km 6.8mi from the wind energy plant.

For this particular frequency, the decay of spectral amplitude with increasing distance from the source exhibits a complicated pattern (Fig. 8b).  In particular, we observe a marked change in the amplitude decay rate for source-to-receiver distances on the order of 2500-3000m 1.6mi-1.9mi.

In this paper we analysed the seismic noise wavefield in the vicinity of the VIRGO gravitational wave observatory (Cascina, Pisa—Italy), with special reference to the action of a nearby wind park composed by four, 2 MW turbines.

Using stations deployed at distances ranging between  1200m and  11,000m 6.8mi from the barycenter center of the wind park, we obtained recordings of the noise wavefield over a wide range of site conditions and epicentral ranges.

We noted that path effects modify significantly the source spectrum, implying that beneath-turbine measurements measurements taken directly beneath the turbine blades are not fully indicative of the effective contribution of the wind park to the far–field ground vibration spectra.

Therefore, the spectral components of the noise wavefield likely due to the action of the wind park had to be discriminated calculated on the basis of indirect evidence, including: (i) correlation of narrow-band noise amplitude with wind speed, (ii) directional properties, and (iii) attenuation with increasing distance from the wind park.

Basing Based on these results, we individuated distinguished several frequency bands likely due to the action of the wind park. Among these, the most energetic is that at a frequency of 1.7 Hz which, under particular conditions (i.e., low cultural noise man-made noise and strong wind) can be clearly observed at epicentral distances from the turbine array as large as 11km 6.8mi.

At this particular frequency, the waves depict demonstrate a complicated pattern of attenuation with distance, characterised by a marked decrease in the decay rate for ranges larger than 2500–3000m 1.6-1.9mi.

We interpreted this pattern in terms of a simplified propagation model involving the combination of direct, cylindrical waves and body head waves continuosly refracted at a deep (800 m half a mile) interface separating the shallow marine-lacustrine lake sediments from the carbonate basement. This model is based on several simplifying assumptions, including: (i) seismic energy is equally parted divided into surface and head body waves, and no other wave types and/or wave conversions are allowed, and (ii) site effects are negligible.

By further assuming that (i) each turbine radiates the same amount of energy; (ii) signals from individual turbines sum add constructively, (iii) the velocity structure of the propagation medium is laterally homogeneous, and (iv) local amplification effects are negligible, we thus defined a model relating the seismic amplitude recorded at a given distance to the radiation of each individual turbine.