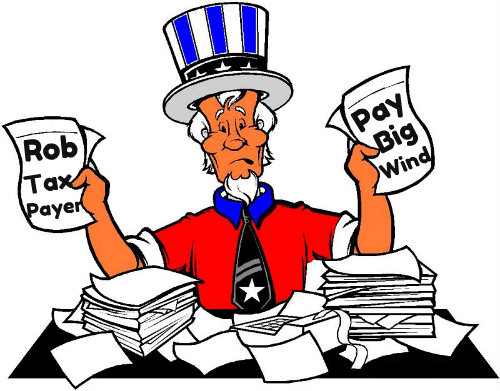 Editor’s note:  At the eleventh hour, just before plunging headlong over the much ballyhooed “fiscal cliff,” the US Congress renewed Big Wind’s Production Tax Credit, allowing wind developers to harvest taxpayer dollars for another 20 years.

Twenty years?  Yes, you read it right.  Any windfarms which are begun in 2013 will be eligible for a tax credit for 20 years thereafter.  “Starting” a windfarm can be as trivial as taking a shovel and moving a pile of dirt—once local approvals have been secured.

All the more reason for communities to stall these projects.

Congress has once again demonstrated its incompetence, in this case, its incompetence to grasp the fleecing of the American taxpayer by Big Wind.  (In fairness to the scrambled brains in Congress and the White House, the American Wind Energy Assoc. mounted a full court press, which was obviously effective.  Once more, lobbying by Big Money wins the day.)

Is this Congress really able to govern us?  Let me rephrase that:  Is the Congress competent to govern?  Notice how it handles our finances.  The following was sent by one of our readers.

Here’s another way to look at the debt ceiling.  Let’s say you come home from work and find there has been a sewer backup in your neighborhood, and your home has sewage all the way up to your ceilings.

What do you think you should do?  Raise the ceilings or remove the shit?