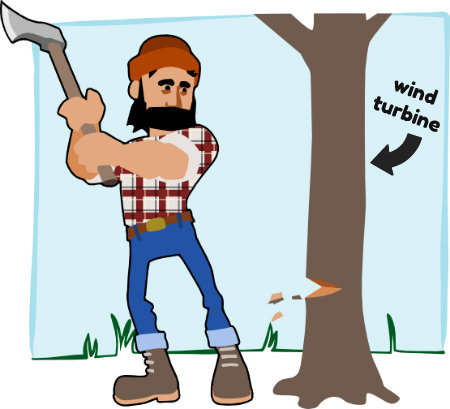 Two wind turbines towering above the Cape Cod community of Falmouth, Mass., were intended to produce green energy and savings — but they’ve created angst and division, and may now be removed at a high cost as neighbors complain of noise and illness.

“It gets to be jet-engine loud,” said Falmouth resident Neil Andersen. He and his wife Betsy live just a quarter mile from one of the turbines. They say the impact on their health has been devastating. They’re suffering headaches, dizziness and sleep deprivation and often seek to escape the property where they’ve lived for more than 20 years.

“Every time the blade has a downward motion it gives off a tremendous energy, gives off a pulse,” said Andersen. “And that pulse, it gets into your tubular organs, chest cavity, mimics a heartbeat, gives you headaches. It’s extremely disturbing and it gets to the point where you have to leave.”

The first turbine went up in 2010 and by the time both were in place on the industrial site of the town’s water treatment facility, the price was $10 million. Town officials say taking them down will cost an estimated $5 million to $15 million, but that is just what Falmouth’s five selectmen have decided to move toward doing.

“The selectmen unanimously voted to remove them. We think it’s the right thing to do, absolutely,” Selectman David Braga said. “You can’t put a monetary value on people’s health and that’s what’s happened here. A lot of people are sick because of these.”

·
Click here to read more and watch the video.