Turbines declared a nasty neighbour as secret buyout is revealed.  Victorians who have endured health problems from a nearby wind farm have been gagged from talking in return for the sale of their land.”

Spanish multinational energy company Acciona has been quietly buying farms adjacent to its site at Waubra, near Ballarat, as an increasing number of residents in the tight-knit community complain of the ill-effects of living near turbines.

Since the wind farm started operating in July 2009, about 11 houses in the area have been vacated by people complaining of noise problems.

Acciona has bought at least another seven houses, the purchase of two of which appear to have been prompted by the new State Government’s threat to shut down the farm unless noise and permit conditions were met.

Locals in the tiny town of 700, 35km northwest of Ballarat, say the sales took place on the proviso landowners would not talk about the price of the purchase or negative health effects they blame on the wind farm.

Residents who refuse to move have accused the company of trying to buy their way out of trouble. 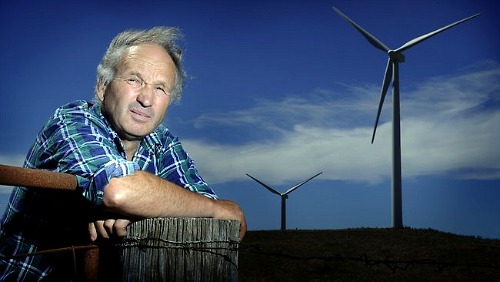 Noel Dean moved from Waubra to Ballarat 18 months ago because he could no longer stand headaches, tinnitus and poor health he believes are caused by high-frequency vibrations from turbines.  (Editor:  The writer of the article got it wrong.  It’s low-frequency noise/vibration.)

“The word is they’re buying everyone out and buying some of the other properties nearby just to hush them up,” he said.

“They know that we can’t fight them. We can’t win.

“They make you suffer so that you just want to get out of there. They know that it gets to you emotionally and physically.”

Mr Dean refuses to sell his property because he does not want future generations to suffer like his family. He only returns to the farm when he has to — about once a fortnight — and says every time he does he gets head pain within five minutes that takes up to 10 days to go away.

Doctors’ certificates seen by the Sunday Herald Sun back his claims.

“Once (the vibrations) get inside the house it bounces off the walls and makes you feel sick,” Mr Dean said. “If you’re exposed to it outside it goes into your inner ear and affects your balance. It’s put tinnitus in my ears which stops me sleeping.”

He has met the company to discuss his concerns, but said they would only take statements, not answer his questions.

“And there’s nothing we can do about it. It’s a bloody terrible thing.

“It’s knocked us around. We’re in limbo. We’ve lost two years of our life and we don’t know where it will end. I’ve put nearly 40 years into that place. It’s prime property that I was going to pass down to my son. What am I going to do? I can’t work there without being ill.”

Former National Trust chairman Randall Bell, now president of Victorian Landscape Guardians, said wind farm companies had a reputation for pulling out their chequebooks to make a problem go away.

“What they do is make people sign gag agreements which dictate that they can’t speak about the sales or their health,” he said.

“It’s a way of shutting people up.”

Acciona generation director Brett Wickham said there was no proof wind farms affected people’s health, and the plant, which employed about 70 people, was generally well accepted.

He said the most recent two houses bought by Acciona were purchased in September and October last year, when noise levels detected on the property were in breach of the company’s planning permit.

And he said confidentiality contracts used by the company were “standard practice for the industry“.

“Most of the landowners have actually sought confidentiality agreements as well,” he said.

“They are what they are.”

But Karl Stepnell, who moved his wife and three children out of Waubra after sleepless nights, heart palpitations, ear pressure and nausea that began when the turbines started turning, disagreed.

“They have bought a lot more houses than seven. There are empty houses all over the place,” he said.

“We’re all for green energy, but there have to be more conditions on what the wind companies can do.”

Planning Minister Matthew Guy, who has the power to shut down the wind farm if it does not comply with its permit, said the Government was watching closely to ensure that wind farm operators played by the rules.

“If they are not complying with their planning permit, I would close it down,” he said.

“Just as someone who doesn’t comply with a building permit or doesn’t pay a parking fine would be in trouble, so will they.”

A Senate inquiry into the possible adverse impacts of wind farms will be held later this year.